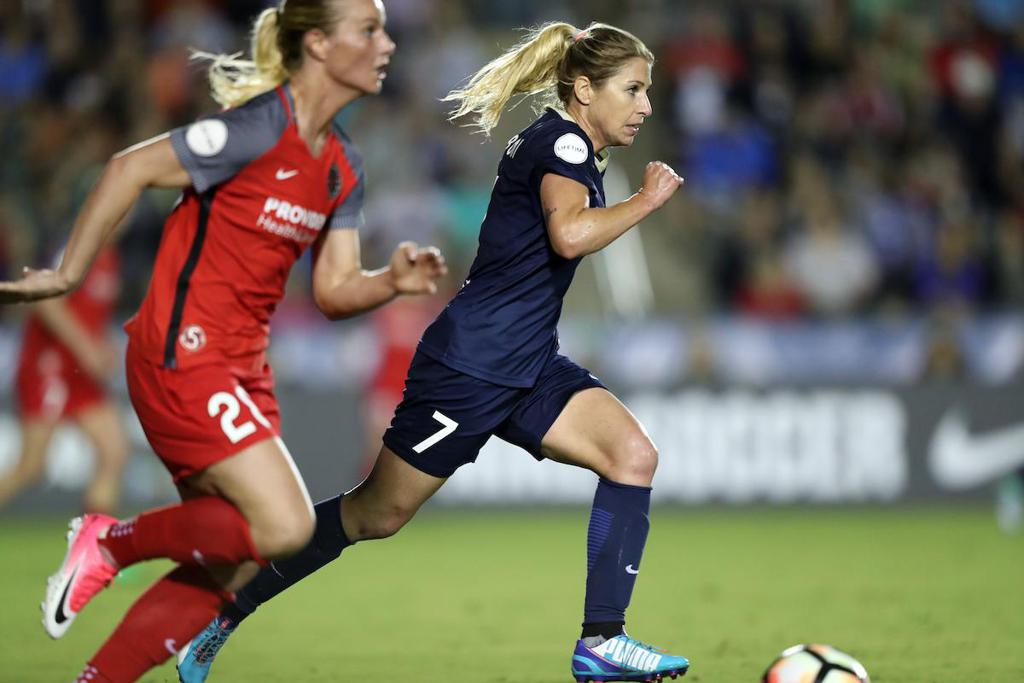 Match Preview:
The North Carolina Courage (9W-4L-0D, 27 pts, 1st place) travels to Providence Park to take on the Portland Thorns (5W-4L-4D, 19 pts, 3rd place) on Saturday, July 15 in the NWSL Game of the Week on Lifetime. This is the second and final meeting between the two teams this season. The Courage were victorious in the first match up, beating the Thorns FC 1-0 at home in Week Two of the NWSL season. Debinha netted the first goal in Courage History at Sahlen’s Stadium at WakeMed Soccer Park off an assist from Jessica McDonald for the only tally of the game.

The NC Courage hopes to continue its spectacular defensive play on the road. The club has earned shutouts in two of its last four matches, allowing only two goals since Week Nine of the NWSL Season. North Carolina recently earned clean sheets against the Boston Breakers and top offensive side Seattle Reign FC. The Courage will need to continue to play with intensity and resiliency as the club makes the long trek to the West Coast. Portland is known for its raucous fans, making it one of the toughest places to play in the NWSL.

Last Time Out:
The Courage are coming off a decisive 2-0 shutout against the Seattle Reign. Defender Taylor Smith took advantage of her speed and ball-hawking skills to slow down NWSL leading scorer Megan Rapinoe. Goalkeeper Kate Rowland stepped up, making four saves to preserve the clean sheet. Midfielder McCall Zerboni made her presence felt all over the field as she created the chance for rookie Ashley Hatch to score in the 33rd minute. Zerboni also netted a goal of her own in the 81st minute, redirecting an attempted clearance into the back of the net. Hatch has continued her hot streak, scoring her fourth NWSL goal in her last five appearances.

Portland Thorns FC enters the match after earning a single point against the Houston Dash on the road.

Players to Watch:
#12 Ashley Hatch
Hatch comes into this week having scored in four of her last five matches. The rookie immediately made an impact upon earning the call as a starter. She also scored one goal during the international break, leading the USWNT U-23 squad to a victory against Sweden. Look to Hatch to keep attacking the net as she makes her case for NWSL Rookie of the Year.

#7 Lindsey Horan
Horan is having a solid year for the Thorns in the midfield with three goals and one assist. Most recently, she scored a spectacular free kick equalizer in added time to save a point on the road in Houston. The NWSL Player of the Week in Week Eight is part of an elite midfield that looks to cause problems in front of Portland's boisterous home crowd.

Coming Up Next:
The North Carolina Courage wraps up its two game road trip as it visits FC Kansas City on Saturday, July 22. The Courage return home to Sahlen’s Stadium at WakeMed Soccer park on Saturday, August 5 at 7:30 p.m. to take on the Seattle Reign FC. Tickets are available at NCFCTix.com or by calling the box office at 919.459.8144.