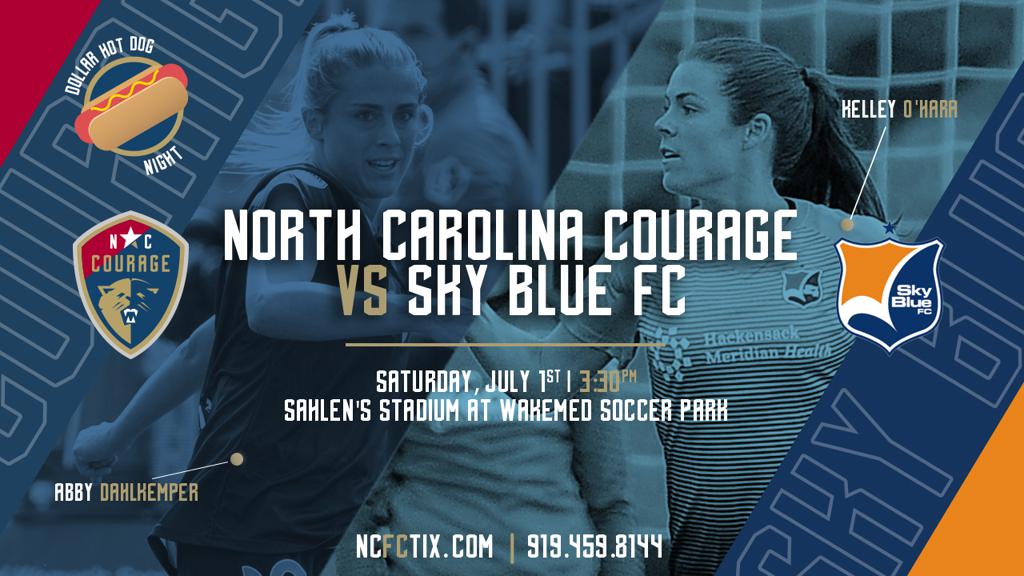 Match Preview:
The North Carolina Courage (8W-3L-0D, 24 pts, 1st place) hosts Sky Blue FC (5W-6L-1D, 16 pts, 5th place) on Saturday, July 1 at Sahlen’s Stadium at WakeMed Soccer Park in the NWSL Game of the Week on Lifetime. This is the second time the NC Courage has faced Sky Blue this season, and the second of three total regular season meetings between the two teams. The Courage won the first match against New Jersey in a decisive 2-0 shutout behind a pair of first-half goals from Lynn Williams and Sam Mewis.

The NC Courage looks to continue its high-caliber play, as the club has earned nine points in its last three meetings. North Carolina also hopes to extend its lead atop the NWSL table with its strong offensive and defensive play. Sky Blue FC makes the trip to Cary, N.C., led by USWNT stars Kelley O’Hara and Christie Pearce and the June NWSL Player of the Month Sam Kerr.

Last Time Out:
The Courage is coming off back-to-back wins over the Boston Breakers in a home and away series. Rookie Ashley Hatch scored the lone goal in a 1-0 victory at Boston, extending her NWSL goal scoring streak to three games. Goalkeeper Kate Rowland earned her third shutout of the season, making three saves to preserve the clean sheet.

Sky Blue FC enters the match after dropping its last two matches. The visitors fell 2-1 to Chicago last week and most recently dropped a 3-2 decision to Orlando in a midweek match.

Players to Watch:
#5 Sam Mewis
Mewis has been a staple in the Courage starting XI this season, playing all 990 minutes so far. The versatile midfielder has recorded two goals and three assists on the season, most recently assisting on Ashley Hatch’s goal in the 1-0 victory in Boston last week. Her polished offensive and defensive skills combine to make her a threat on both sides of the field.

#20 Sam Kerr
Kerr is having an outstanding season for Sky Blue FC, totaling five goals and three assists through 11 games. Kerr was recently named the NWSL June Player of the Month. She most recently scored in the team's loss to Orlando on June 28 and scored a pair of goals while adding an assist in a 3-1 victory over the Portland Thorns FC on June 17.

Coming Up Next:
The NC Courage continues its home stretch as the club hosts the Seattle Reign for the first time this season. Catch the action at Sahlen’s Stadium at WakeMed Soccer Park on Saturday, July 8 at 7:30 p.m. Fans can purchase their tickets at NCFCTix.com or by calling our box office at 919-459-8144.