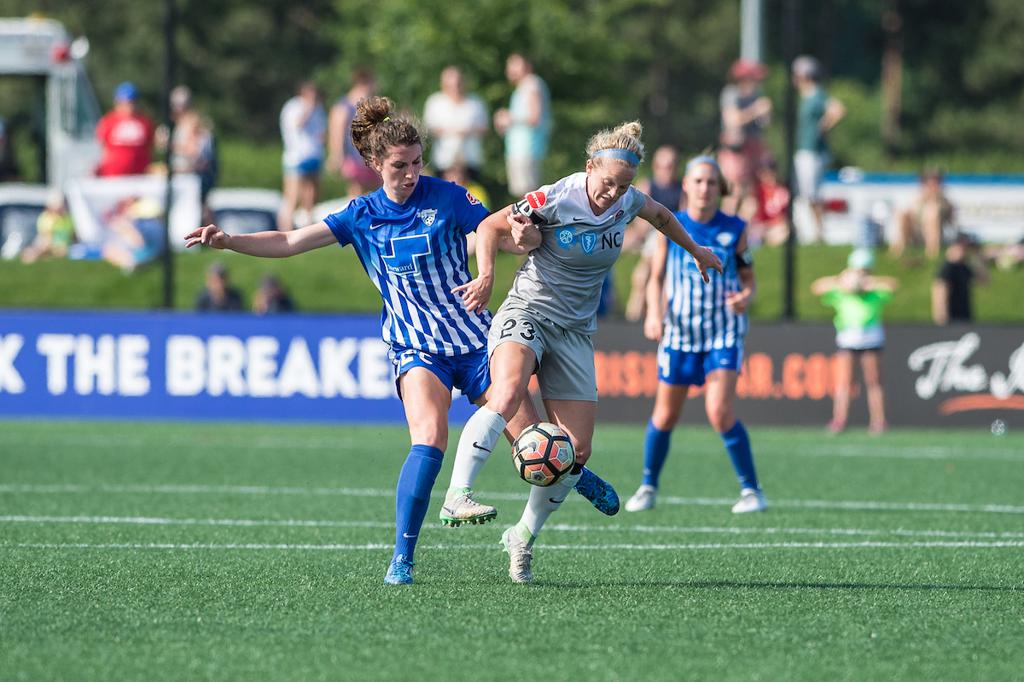 Match Preview:
The North Carolina Courage (7W-0D-3L, 21 pts) heads to Jordan Field for a rematch against the Boston Breakers (2W-2D-5L, 8 pts). This will be the last of three regular season meetings and the second-straight meeting between the two clubs. The Courage won the first two matches, most recently behind a first-half barrage of goals from Kristen Hamilton and Ashley Hatch.

The first-place Courage has earned nine points in its last four matches and hopes to extend its lead atop the NWSL standings even further. The Boston Breakers return home from a three-game road trip where the club aims to earn its first points in four weeks.

Last Time Out:
The Courage picked up right where it left off before the international break in top offensive form. The club led 3-0 at the half as Kristen Hamilton scored the first two goals of her professional career in the first 13 minutes of play and Ashley Hatch scored in her second consecutive match to extend the first-half lead to 3-0. The NC Courage were relentless offensively, totaling 17 shots and forcing Boston goalkeeper Abby Smith to make five saves. Boston spoiled the shut-out for the Courage as Adriana Leon found the back of the net in the 74th minute.

Players to Watch:
#23 Kristen Hamilton
Hamilton made her first professional start for the club in Week 10 and did not disappoint. The 25-year-old forward scored her first career goal in just the third minute of play and quickly added a second just 10 minutes later. Hamilton has made the most of her opportunities this season scoring two goals on two shots. She will look to continue her hot offensive streak into this week’s match

#7 Emilie Haavi
Haavi is a talented and dangerous forward with strong international experience. The Norwegian International recently traveled with her native national team during the break, coming on as a substitute against the USWNT. Haavi has started three games for the Breakers and is still looking for her first NWSL goal, but is more than capable of finding the back of the net.

Coming Up Next:
The NC Courage returns home to Sahlen’s Stadium at WakeMed Soccer Park on Saturday, July 1 at 3:30 p.m. to take on Sky Blue FC. Fans can purchase their tickets at NCFCTix.com or by calling our box office at 919-459-8144.