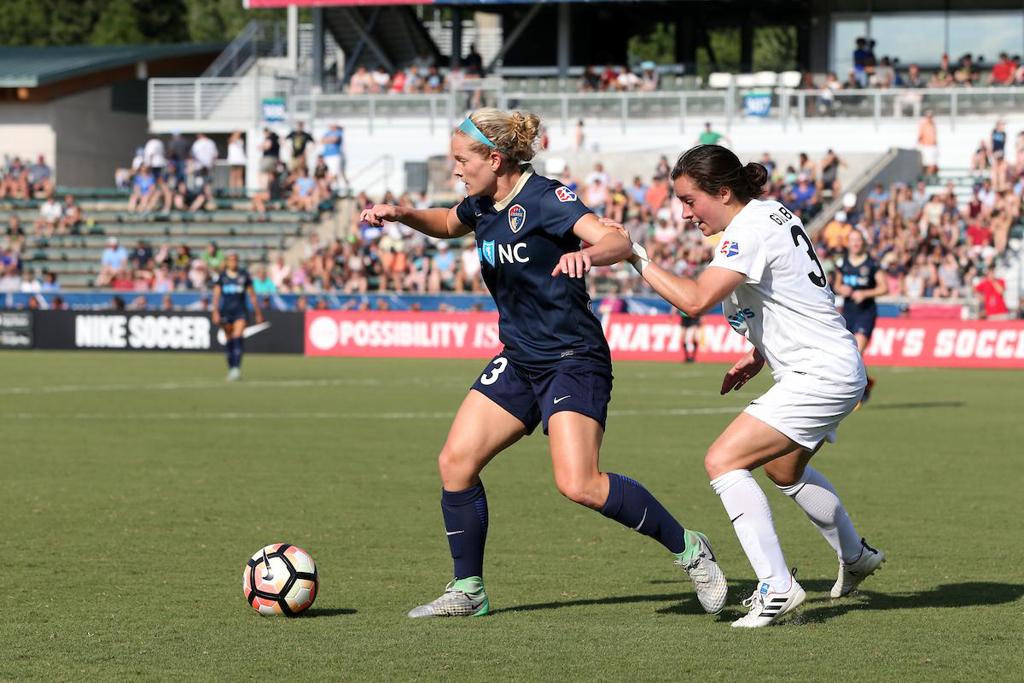 Match Preview:
The North Carolina Courage (6W-0D-3L, 18pts) return to Sahlen’s Stadium at WakeMed Soccer Park today to face the Boston Breakers (2W-2D-4L, 8pts) on Pride Night. This will be the second of three regular season meetings between the two clubs. The Courage won the first match between the two clubs 1-0 behind a goal from Jessica McDonald.  The goal from McDonald made her the all-time regular-season goal scorer in the NWSL with 33 goals.

The Boston Breakers enter Sahlen’s Stadium for the last of a three-game road trip.  The Breakers look to find a positive result after two consecutive losses, while the Courage hope to continue their strong home performance.  This match highlights Pride Night for the NC Courage as the club shows their support for equal rights.  The NC Courage match will be kicking off Pride Week, which includes multiple events in the area to support the LGBTQ community. The NC Courage look to pick up another 3 points and extend their first-place lead in the standings even further.

Last Time Out:
The Courage extended their first-place lead following a 2-0 victory over FC Kansas City.  McCall Zerboni led the attack for the Courage while rookie Ashley Hatch added her first career goal in her first career start.  Goalkeeper Katelyn Rowland was spectacular in goal, earning her second clean sheet of the season. The Boston Breakers fell to the Orlando Pride on the road 2-0.

Players to Watch:
#12 Ashley Hatch
The 2017 second overall draft pick scored her first NWSL goal against FC Kansas City in the Courage’s last home game on June 3, and that’s just the start of what is sure to be many goals this season for the rookie. Hatch is returning to the team after traveling to Sweden with the U-23 USWNT last week. The forward scored in the 18th minute of the match against Sweden, helping the USA lock in a 2-1 victory. With role models to look to on the field like Lynn Williams and Jess McDonald, Hatch continues to develop her attacking skills, making her a threat up top.

#19 Adriana Leon
Leon has been a key player for the Breakers offense.  The NWSL Player of the Week in Week 3 is second in the league in assists with three while adding one goal of her own.  The young Canadian was a member of the 2016 Western New York Flash before the club moved to Cary. Her combination of passing and goal scoring ability make her dangerous in the open field.

Coming Up Next:
The NC Courage will head to Boston on Saturday, June 24 for a rematch of tonight’s game against the Boston Breakers.  The Courage return home to face Sky Blue FC at Sahlen's Stadium at WakeMed Soccer Park on Saturday, July 1. Fans can purchase their tickets at NCFCTix.com or by calling our box office at 919-459-8144.