USWNT players and coaching staff descended on Sahlen’s Stadium at WakeMed Soccer Park for some practice and to meet with media. 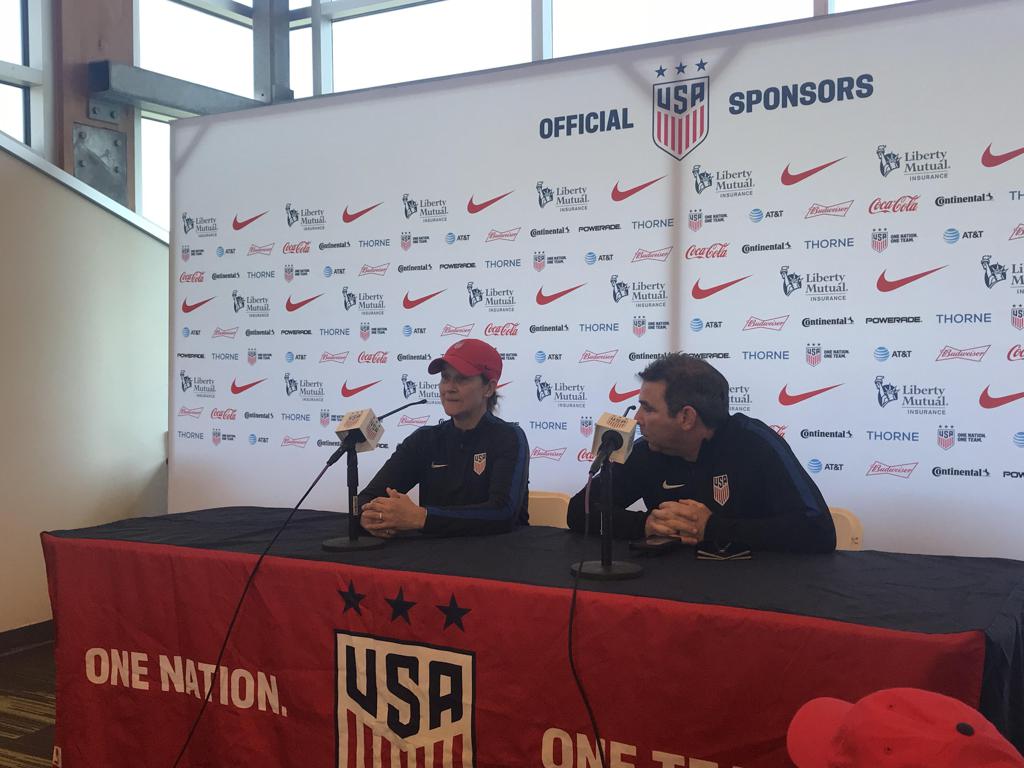 With the U.S. Women’s National Team game against Korea Republic (Sunday, 2:00 p.m., ESPN), only a day away, USWNT players and coaching staff descended on Sahlen’s Stadium at WakeMed Soccer Park for some practice and to meet with media.

We caught up with USWNT head coach Jill Ellis and some of your favorite NC Courage players to get their thoughts on the Courage’s season, the game and playing in front of their home crowd at such a beautiful venue.

“I think it was a good season,” said Ellis on the NC Courage’s successful inaugural season. “To win the [NWSL] Shield is a really good accomplishment. The league top to bottom is challenging and to win it is a good reflection on those players on the U.S. National Team.”

“Taylor’s [Smith] consistency on playing that outside back position has only helped us,” Ellis continued as she spoke about Courage players on the USWNT. “I think Sam [Mewis] obviously growing in confidence from season to season and the leadership role she has with the Courage benefits us and I think Abby [Dahlkemper] having to face some of the best forwards in the world every week has helped us and her growth. Lynn [Williams] played slightly different positions here that have helped her grow. Having to play with different partners only helps a player who comes into this environment and having a bit more flexibility in the roles one can play. I think overall seeing them in the final was well deserved and the confidence of being in a successful team has only helped us.”

“The league is definitely helping us in terms of our players getting minutes and also gives me the ability to find players for the [National] team,” Ellis said.

Ellis also spoke about playing at WakeMed Soccer Park and what a great venue for soccer Sahlen’s Stadium is.

“We always enjoy playing here,” Ellis continued. “I think it’s two-fold. It’s the atmosphere and the fans who are very knowledgeable about the game and generate a level of energy our players feed off of. I also think it’s the surface. The quality of the field is always important for us coaches and for the players. It’s always been held in a very high regard in terms of our ability to play on it. When you combine those two things it obviously becomes a great venue for us and for women’s soccer.”

Ellis, as well as some McCall Zerboni and some of her NC Courage teammates also touched on her first call-up into the USWNT.

“McCall has been in the conversation for some time,” said Ellis. “We are heavier in the midfield than we were in the past but I think her play in the league has merited her being on our radar. She has been one of the best players in the league and an opportunity presented itself so I feel very confident in bringing her in to this environment and I think it’s well deserved.”

“I am so happy for her she deserves it she’s had such a great year and all of her hard work has been paying off,” Dahlkemper said. “She’s a great person and player and plays some of the best soccer in the league so hopefully she gets an opportunity to play.”

So did forward Lynn Williams who also commented about the excitement on playing in front of NC Courage fans on Sunday.

“It’s amazing and comforting to know that I’ve played in this stadium before and hopefully we will have a lot of fans who come out to NC Courage games,” Williams said. “I think that at the end of the day this crowd will bring a lot of energy because this city loves soccer.”

“I was so excited, I texted her immediately,” Williams continued when talking about Zerboni’s call-up. “I am super excited for her as she’s worked so hard her whole career and so for her to get this opportunity is amazing. She takes on the mother role at the Courage. Having her with us adds a level of comfort and I can’t wait to see what she does.”

Midfielder Samantha Mewis, who appeared in every USWNT  match in 2017, is also very excited about the opportunity to play in front of NC Courage fans on Sunday.

“Just walking in feels great, it feels like home,” Mewis said. “Especially having McCall, Abby and Lynn here. It’s so cool to be here in our home stadium and hopefully I feel really comfortable and hopefully tomorrow I get a chance to play in front of the fans who I feel deserve to see some of us and I’m really excited to give them that.”

Dahlkemper, Mewis, Zerboni and Williams will be available for selection tomorrow as the USWNT faces off against Korea Republic at 2:00 p.m. at Sahlen’s Stadium at WakeMed Soccer Park. The game will be broadcast live nationally on ESPN.