WHAT YOU NEED TO KNOW: NC COURAGE VS. CHICAGO

Following a regular season of rewriting the NWSL record books and capturing the league’s regular season title, the NC Courage will begin its journey to win the NWSL Championship with a semi-final playoff match at home. 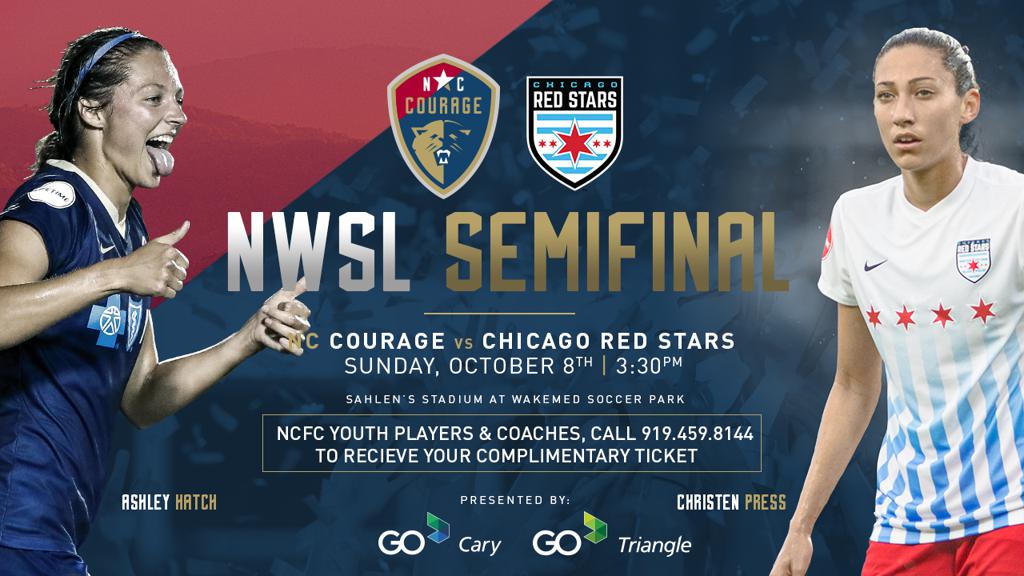 Following a regular season of rewriting the NWSL record books and capturing the league’s regular season title, the NC Courage will begin its journey to win the NWSL Championship with a semi-final playoff match at home. Fewer than 1,000 tickets remain for this historic match at Sahlen’s Stadium at WakeMed Soccer Park when the Courage face the Chicago Red Stars on Sunday, Oct. 4 at 3:30 p.m.

The club is expecting a capacity crowd and electric environment. Check out the info below to maximize your gameday experience and learn about some exclusive fan opportunities.

Park For Free:
All stadium parking is free and tailgating is encouraged. The parking lots will open for fans at 12 p.m.

Exclusive GoTriangle and GoCary Offer:
GoTriangle Route 300 will be free on Oct. 8 for those traveling to Sahlen’s Stadium at WakeMed Soccer Park in Cary to cheer on the National Women’s Soccer League regular season champs. Those who show tickets to the 3:30 p.m. match will pay no fare on GoTriangle Route 300, which is operated by GoCary. The route stops at the Cary Train Station and on Chatham Street near the soccer park on its way between Cary and Raleigh. Board at the Cary Train Station, the GoRaleigh Station or anywhere along the route.

Countdown to Kickoff:
Plan to arrive early and beat the traffic. Spacious parking lots offer fans the perfect chance to tailgate before the match. After the lots open at 12 p.m., fire up the grill, kick the soccer ball around or just relax in the shade prior to the gates opening. On your way into the stadium, enjoy a carnival-like atmosphere at the gates. In addition to plenty of passionate Courage fans waiting to enter the stadium, visit our vendor village at the gates for games and giveaways.

Family Zone:
The Family Zone in the Northwest corner of the stadium offers fans plenty of exciting things to do before the match. You can test your skills on the inflatable soccer goal or take a shot at soccer pool before stopping by the merch tent to get the latest NC Courage and NCFC swag. If you want a pregame snack or meal, stop at one of Backyard Bistro’s main concession stands located in the family zone along with a Lumpy’s Ice Cream tent. Don’t forget to take your pride to the next level with the face-painting booth as well.

Concessions:
There’s something for everyone at our many concession stands around the stadium. This week’s Backyard Bistro special is the Bistro Burrito (pulled pork, fries, slaw and western sauce wrapped in tortilla) with a fountain for only $10. In addition to the special, traditional American sports food is also available at Backyard Bistro stands, including chicken tenders, french fries, Sahlen’s hotdogs, and more.

If you’re in the mood for something lighter, Kona Ice, Lumpy’s Ice Cream, and snack stands are also located throughout the facility.

For those looking for a cold beverage, beer, wine, Pepsi products and bottled water are available throughout the stadium.

Kickoff:
Get to your seats before kickoff to enjoy a match set for the history books and highlight reels. With a beautifully-designed 10,000-seat stadium, there’s not a bad view in the house.

Tickets:
Secure you seats at the game before our 1,000 remaining tickets are sold out! Purchase your tickets at NCFCTIX.com or call our NCFC Ticket Office at 919-459-8144. Interested in bringing your group to the soccer match? Chat with one of our ticket representatives to learn about special ticket pricing for groups at 919-459-8144.