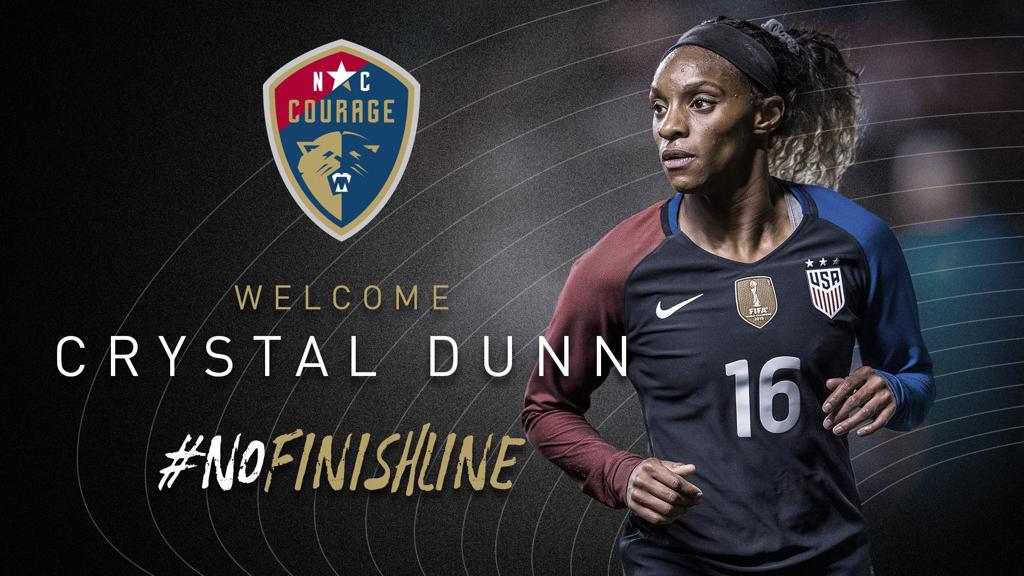 Cary, NC (Jan. 16, 2018) - The North Carolina Courage has acquired the rights to U.S. Women’s National Team forward Crystal Dunn in exchange for Taylor Smith and Ashley Hatch via trade with the Washington Spirit, the club announced today. With the trade, the NC Courage also acquired an important international roster spot which will be highly beneficial in preserving the core of the team.

"Bringing Crystal back to NC has always been a goal of the franchise, and it’s incredible to see it come to fruition,” said NC Courage Head Coach Paul Riley, who is no stranger to Dunn’s versatile talent as he contributed to her player development in her youth days with New York’s Albertson Fury.

“She is an outstanding player with bags of speed, desire and game changing ability. It's a massive year ahead for Crystal, and we hope we can be a big part of her continued development both in the NWSL and on the international stage. She is eager to get started, meet her new team and add to our young, talented squad."

The New Hyde Park, N.Y. native is a proven trailblazer who has created unprecedented success in both her collegiate play at UNC and her professional career. She was selected as the first overall pick in the 2014 NWSL College Draft by the Washington Spirit and made 22 appearances in her rookie season. She went on to become the youngest player to ever win the NWSL Golden Boot Award and Most Valuable Player award after she scored 15 goals during the 2015 season at age 23. Dunn’s teammate, Lynn Williams, is the only other player to win both awards at 23 years old.

Dunn stood out in the 2016 NWSL Championship, scoring two goals in a match that concluded in a penalty-kick loss to the Western New York Flash (now NC Courage). Following the Spirit’s 2016 playoff run, Dunn took her talents to English FA Women’s Super League 1 club Chelsea L.F.C. where she made 11 appearances and scored three goals.

"I'm really excited to be back in an area that means so much to me," said Dunn. "I know I am joining a great team and a club with an incredible history. I am just excited to get started and meet my new teammates.”

She has also thrived in her international career making 57 appearances and scoring 22 goals since her first senior team cap with the United States in 2013. She was part of the 2016 USWNT roster for the Olympic Games in Rio de Janeiro and has participated in several friendlies and international tournaments over the last five years. Additionally, Dunn was awarded the CONCACAF Women’s Olympic Qualifying Tournament Golden Boot Award in 2016 after scoring six goals during the tournament. The listed forward is currently with the USWNT in Carson, Calif. for January Camp which concludes with an international friendly against Denmark on Sunday, Jan. 21 in San Diego.

Dunn is a familiar face to the Triangle area where she was a collegiate standout at UNC-Chapel Hill from 2010-2013. During her junior year in 2012, she led the Tar Heels to a national championship in the NCAA College Cup, a tournament in which she scored an astonishing five goals as a regular-season defender turned post-season attacking midfielder. Dunn went on to become the 2012 MAC Hermann Trophy winner, ACC Player of the Year and ACC Defensive Player of the Year. She preceded her 2012 accolades by becoming the first freshman to earn ACC Defensive Player of the Year in 2011, making her the first player to win the award twice.

“We are thrilled to welcome Crystal Dunn to the North Carolina Courage,” said North Carolina Football Club President and GM Curt Johnson. “It's a fantastic homecoming for her. Her career at UNC and with our U.S. National Team speaks for itself. She is one of the greats in the history of the UNC program and returns to NWSL in the prime of her career. At the same time, it's a heartfelt thank you and good luck to Taylor and Ashley. They are both great pros, teammates and people.  They will be missed.”

Hatch and Smith depart the club after contributing to its success in 2017, helping the NC Courage reach the NWSL Championship. The club wishes them all the best in the future.

"It's been a very difficult few days,” Riley continued. “We lost two fabulous players who have been a massive part of our culture. Taylor's growth and improvement over the past two years has been remarkable, and we will continue to watch her development with great pride. Hatchy had a tremendous rookie season and Washington have a proven goal scorer in their midst with a thirst for training and improving. I want to sincerely thank both for giving our club, our fans and myself everything, every day, all the time."

Dunn and the NC Courage return to Sahlen’s Stadium at WakeMed Soccer Park in Cary, N.C. this spring. Season Tickets and Flex Plans are on sale now, and fans can secure 2018 Season Tickets for $50 down. Call 919-459-8144 or go to NCCourage.com to purchase your tickets for our highly anticipated 2018 NWSL Season.