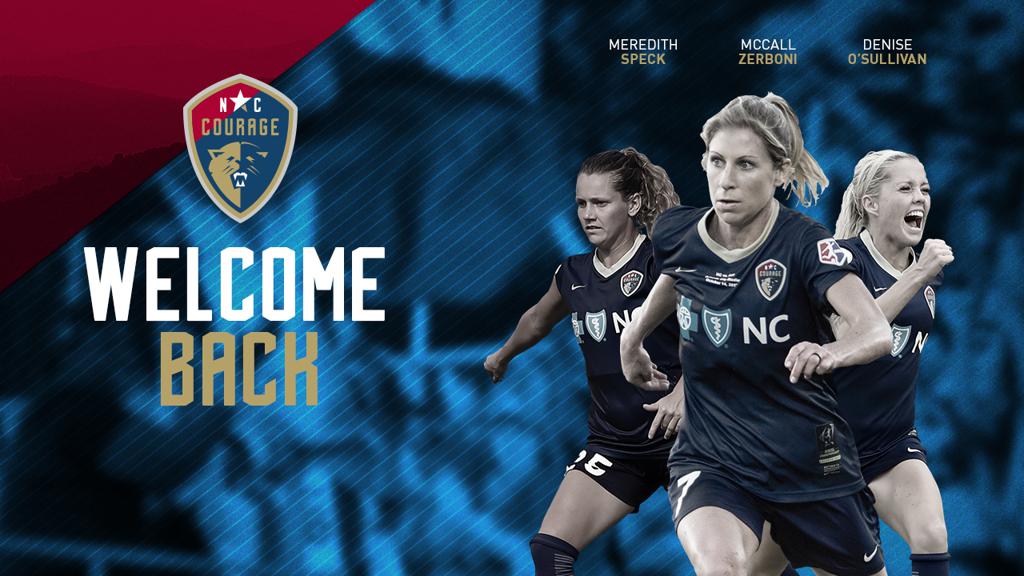 Cary, NC (Jan. 17, 2018) - North Carolina Courage players McCall Zerboni, Denise O’Sullivan and Meredith Speck have each renewed their contracts for the 2018 season, the club announced today. The trio joins a core group of 12 returners and new addition Crystal Dunn to round out the current roster to 16 total before the NWSL College Draft.

"We are excited to bring back many of our core players and continue the development path we set out on two years ago,” said Paul Riley. “These three players have been critical in embracing the club’s culture and leading our identity both on the field and in the locker room."

Zerboni begins her sixth NWSL season after a phenomenal year in 2017. The center midfielder reached a monumental moment in her career as she made her 100th regular season league appearance on Aug. 9, 2017. Zerboni also saw her first U.S. Women’s National Team cap on Oct. 22, 2017 in the NC Courage’s home stadium in Cary, N.C. against Korea Republic. She concluded 2017 with 25 appearances, three goals and one assist for the Courage and was voted to the league’s Best XI.

"McCall is a special team oriented player whose principles of the game totally embrace the NC Courage style,” said Riley. “She is tough, no nonsense, fantastic engine and skillful footballer on the field. She is a pure leader and locker room driving force off the field."

O’Sullivan joined the NC Courage midway through last season from the Houston Dash and quickly emerged as a mainstay in the team’s starting XI. She became the hero of the NWSL Playoffs when she netted the go-ahead goal in the semifinal match against the Chicago Red Stars in the final minute of play to send the Courage to the 2017 NWSL Championship. The Irish international has been making appearances for her country’s first team since 2011 and is still an active member as she competed with Ireland during a series of FIFA World Cup Qualifiers last year.

"We unearthed a gem in Sulli,” said Riley. “She is subtle, bright, understands the game tremendously well and is a workaholic on both sides of the ball. A very gifted footballer whose presence will be invaluable to our young group."

Speck returns for her second season with the NC Courage after joining the team last season from the Western New York Flash’s transition to Cary. She appeared in four games last year for a total of 197 minutes. Speck had a tenured collegiate career at Yale University where she made 56 appearances over the course of four seasons with the bulldogs. Her talent led to three All-Ivy selections in 2011, 2013 and 2014.

"Mer has made big strides over the last few years, and I'm excited for her growth to make the final step to full time starter,” said Riley. “She offers the team speed, excellent soccer IQ, tenacity and a very qualified left foot."

The NC Courage returns to Sahlen’s Stadium at WakeMed Soccer Park in Cary, N.C. for its sophomore season this spring. Season Tickets and Flex Plans are on sale now, and fans can secure 2018 Season Tickets for $50 down. Call 919-459-8144 or visit NCCourage.com/Tickets to purchase your tickets for our highly anticipated 2018 NWSL Season.

About North Carolina Courage
The North Carolina Courage is a Division I professional women’s soccer team that plays in the National Women's Soccer League (NWSL). The NC Courage, the reigning NWSL Shield Winners, plays its home games at Sahlen’s Stadium at WakeMed Soccer Park in Cary, N.C. For more information, please visit www.NCCourage.com or follow us on Twitter and Facebook.