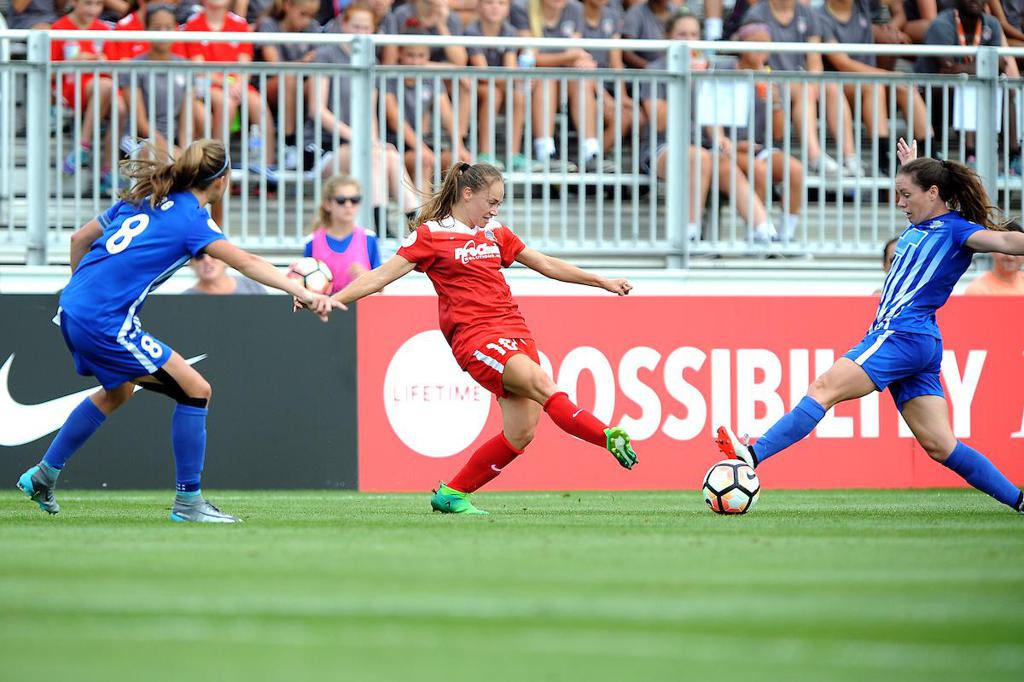 (Cary, NC) Jan. 30, 2017 – The NC Courage selected Julie King and Allysha Chapman in today’s NWSL Dispersal Draft and the 9th and 10th picks, respectively. The Dispersal Draft resulted from the league’s announcement on Sunday that the Boston Breakers were ceasing operations.

King joins the Courage after playing for the Boston Breakers from 2012-2017. She was with Boston during their final year in the WPSL and stayed with the team during its five years in the NWSL. As a defender, King made 21 appearances, logged 1,890 minutes, and scored one goal in 2017. The St. Louis, Mo., native surpassed Kristine Lilly for most all-time appearances in franchise history when she made her 103rd appearance on Aug. 4, 2017. She concluded 2017 with 109 total appearances for Boston. King played collegiately for Auburn University where she scored 13 goals and tallied 10 assists in her four years. She was one of the 2011 SEC Co-Defensive Players of the Year and a First Team All-SEC selection in 2010 and 2011.

“Julie is a defensive juggernaut," said Head Coach Paul Riley. "No prisoners taken when Jules is playing. Excellent tackler, reads game well and knows how to lead and manage a defensive unit. We have a challenging environment here and she will love the competitiveness and growth potential of training. Excited to see her in a Courage uniform and she will fit seamlessly into our locker room Junkyard Dogs mentality.”

Canadian International Chapman played in 19 games for the Breakers in 2017, logging 1,642 minutes. Before joining Boston, Chapman played for the Houston Dash in 2015 and 2016 and made 14 appearances over two seasons. She’s also played professionally for Eskilstuna DFF in the Damallsvenskan and IK Sirius FK in the Elitettan (Swedish second division). She is a current member of the Canadian Women’s National Team and has 88 caps for the senior team. The Oshawa, Ontario native won a Bronze Medal at the 2016 Rio Olympics alongside teammate Sabrina D’Angelo. She played collegiately at LSU where she was a 2011 SEC Co-Defensive Player of the Year, with King and D'Angelo, and First Team All-SEC in 2010.

"Allysha is tough, tenacious and talented," said Riley. "Loves a battle and loves the team mentality. Will provide an attacking option out of the back with a trusty left foot and good soccer IQ. Fits our player profile and we are excited to further her national team career. She is a character on and off the field and the fans will love her no-nonsense approach to the game”

The NC Courage return to Sahlen’s Stadium at WakeMed Soccer Park in Cary, N.C. this spring. Season Tickets and Flex Plans are on sale now, and fans can secure 2018 Season Tickets for $50 down. Call 919-459-8144 or visit NCCourage.com to purchase your tickets for our highly anticipated 2018 NWSL Season.