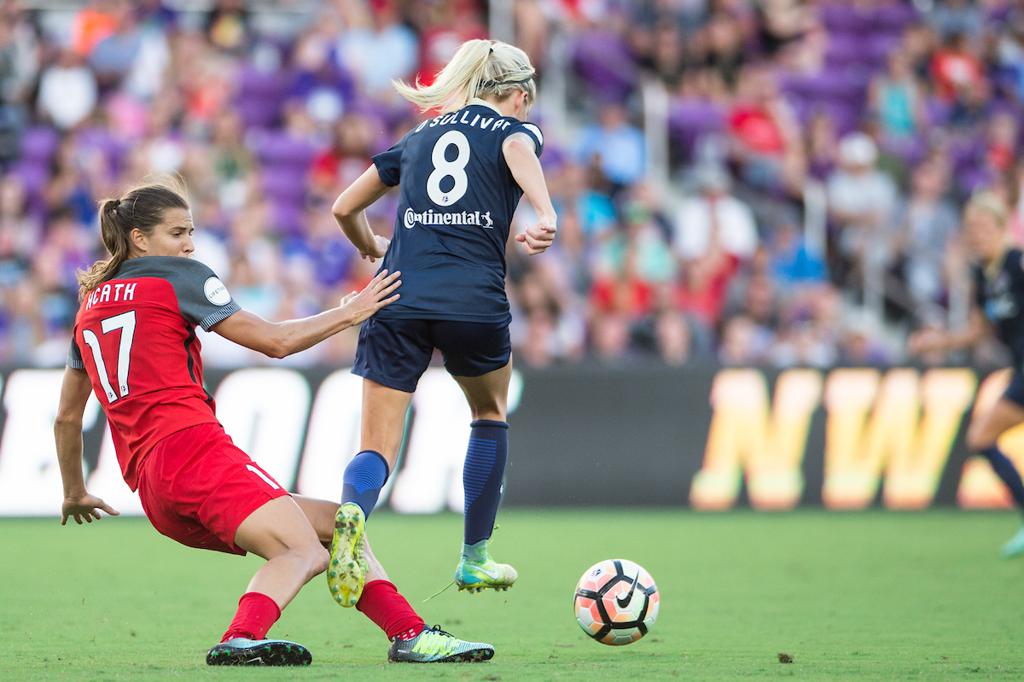 CARY, N.C. (March 23, 2018) - The North Carolina Courage will kick off their second season in the Triangle on Saturday when it hosts the Portland Thorns FC in a rematch of last season’s NWSL Championship at 3:30 p.m. ET at Sahlen’s Stadium at WakeMed Soccer Park.

“What an opener for the NWSL – the two finalists from last year, two of the best fan bases in women’s soccer, two great ownership groups and a healthy rivalry on the field,” Courage head coach Paul Riley said. “Fans will have opportunity to see 18 internationals on the same field at the home opener.”

A season ago, the Courage and the Thorns dominated the NWSL, as both teams ranked second or better in the league in points, wins, goals allowed and home record.

In their first season since relocating from Western New York, the Courage led the NWSL in points (49) and wins (16) as individuals at the club earned honors including Defender of the Year (Abby Dahlkemper), Rookie of the Year (Ashley Hatch) and Coach of the Year (Paul Riley).

The match also marks the second year in a row that the Courage begins its home slate against the Thorns.

In front of 6,298 spectators, the Courage won 1-0 over the Thorns in the club’s inaugural match at Sahlen’s Stadium at WakeMed Soccer Park on April 22, 2017, thanks to an 81st minute goal by Debinha.

Series History:
Since moving to Cary, the Courage are 1W-2L-0D against Portland.

Only one goal was scored in each of the three matches between the Courage and the Thorns last season. If that trend continues, Saturday’s showdown could be a defensive battle that comes down to which team can take their chances.

North Carolina Courage – #19 Crystal Dunn
The Courage’s offseason was headlined by the addition of US Women’s National Team forward Crystal Dunn, who joins the club after most recently playing with Chelsea L.F.C. in England. The Courage acquired the rights to Dunn via a trade with the Washington Spirit, who in return received Taylor Smith and Ashley Hatch. Internationally, Dunn has scored 23 goals since first appearing for the USWNT in 2013 and played for the U.S. at the 2016 Olympics. The move to the Courage is a bit of a homecoming for Dunn, who starred at the University of North Carolina from 2010-13

Portland Thorns FC – #10 Lindsey Horan
The USWNT regular was named to the league’s Second XI in 2017 after finishing the season with four goals and two assists. Horan has earned 47 caps for the USWNT, scoring four goals. In last year’s NWSL Championship match, she was named MVP after netting the lone goal to seal the victory for the Thorns.

Preseason Recap:
On March 17, The Courage concluded a flawless preseason with a 3-0 victory against the Washington Spirit at City Stadium in Richmond, Va., with Abby Erceg, Jessica McDonald and Kristen Hamilton each scoring in the win.

In their final preseason match, the Thorns drew 0-0 against the Houston Dash. In their first two exhibitions, Portland lost 1-0 to The Chicago Red Stars and drew 2-2 against the U.S. U-23 Women’s National Team.

Courage midfielder Samantha Mewis, normally a regular with the USWNT, is not in the squad due to a short-term knee injury.

The first of the two matches takes place on Thursday, April 5, at EverBank Field in Jacksonville, Fla., (7 p.m. ET; FS1 & UDN) and the second game will be played on Sunday, April 8, at BBVA Compass Stadium in Houston (1:30 p.m. ET; FOX).