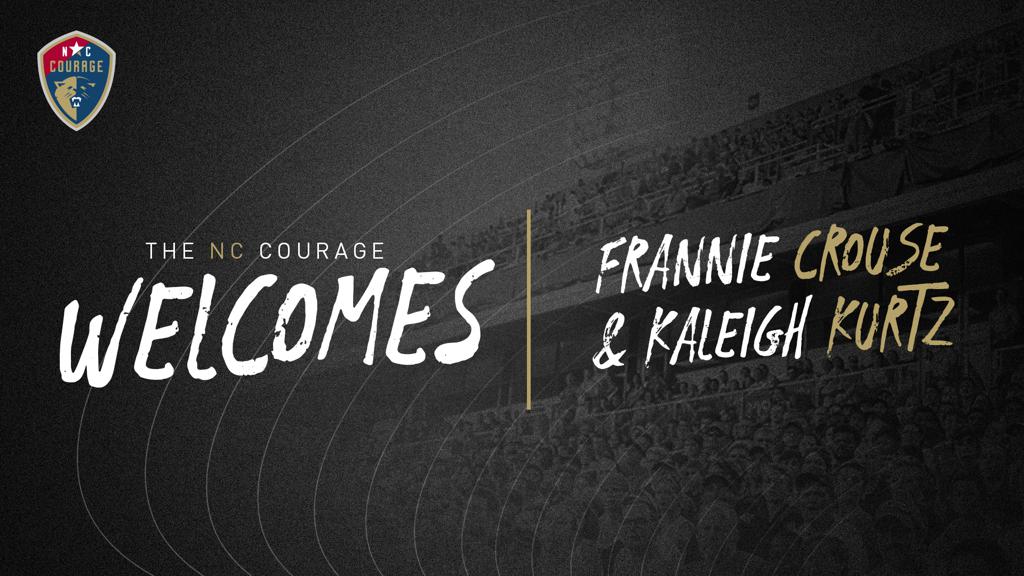 CARY, N.C. (March 23, 2018)- With the start of the 2018 NWSL regular season less than a day away, the North Carolina Courage completed its roster with the signings of first-round draft pick Frannie Crouse and trialist Kaleigh Kurtz, the club announced Friday.

Crouse, the 10th overall pick in the 2018 NWSL Draft, played collegiately at Penn State, where she scored 37 goals and assisted on 17 more in 92 games. As a Nittany Lion, Crouse was named to the 2016 All-Big Ten First Team, the 2015 Big Ten All-Tournament Team and the 2015 Women’s College Cup All-Tournament team. In her senior season, Crouse, a Greensburg, Pa., native, recorded four goals and five assists in 20 appearances, 16 of which were starts.

“It definitely feels great,” Crouse said about signing with the Courage. “It’s something I’ve been working towards my whole life. It’s definitely a dream come true and being able to work with the Courage has been something that I’ve been really privileged to be a part of, and it’s an honor to be able to sign with the team.”

Kurtz, a defender from Greer, S.C., played for Swedish club Östersunds DFF in 2017 and impressed as a non-roster invitee during the 2018 preseason with the Courage . A former college teammate of Courage goalkeeper Sabrina D’Angelo, Kurtz starred as a center back at the University of South Carolina, where she started 69 matches. In 2016, Kurtz earned United Soccer Coaches First-Team All-America honors and was named the SEC Defensive Player of the Year.

“It’s something I’ve always wanted to do,” Kurtz said about joining the Courage and becoming an NWSL player. “The biggest challenge coming into this preseason was knowing how amazing the center backs that are here are. So, knowing that I’m their backup and that they have full confidence in me to be able to fill in for them if need be is amazing.”

The NC Courage will open their highly anticipated sophomore season at home in an NWSL Championship rematch against the Portland Thorns in the NWSL Game of the Week on Lifetime. Kickoff is set for 3:30 p.m. on Saturday, March 24 at Sahlen’s Stadium at WakeMed Soccer Park. Tickets to the home opener are on sale now! Call 919-459-8144 or click here to purchase your tickets.

The North Carolina Courage is a Division I professional women’s soccer team that plays in the National Women's Soccer League (NWSL). The NC Courage, the reigning NWSL Shield Winner, plays its home games at Sahlen’s Stadium at WakeMed Soccer Park in Cary, N.C. For more information, please visit www.NCCourage.com or follow us on Twitter and Facebook.