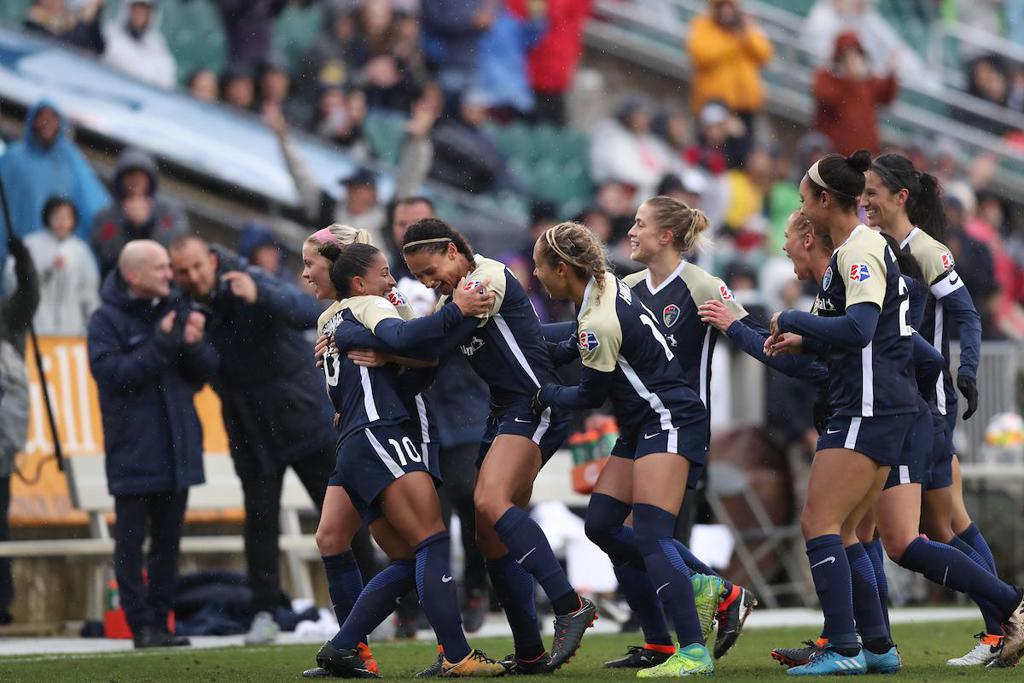 Cary, N.C. (March 24, 2018) – Thanks to a magical second-half strike by Debinha, the North Carolina Courage began the 2018 season in style with a 1-0 victory over Portland Thorns FC in a rematch of the 2017 NWSL Championship at Sahlen’s Stadium at WakeMed Soccer Park on Saturday.

"It was a good performance," said NC Courage Head Coach  Paul Riley following the match. "We created five, six really good chances, I think, to win the game. We didn’t give a lot away, and it’s nice to start on a clean sheet at home. Last year, we kind of built it on clean sheets and, hopefully we can do the same this year. Happy with the result at home. It was a great winner – what a goal to win the game, and Debinha’s been doing that for most of preseason when she’s been here. She’s a different player, and it’s great to have her here and go 100 percent.”

The win marked the second time in as many years that the Courage opened their home slate with a one-goal victory against the Thorns.

Despite controlling the possession and outshooting Portland, the Courage found themselves in a scoreless stalemate until Debinha found a way past Thorns goalkeeper Adrianna Franch in the 70th minute.

Leading up to the goal, Courage midfielder Denise O’Sullivan made a lengthy run toward the Portland box before finding Debinha, who was unmarked. With time to sort things out, Debinha let loose on a powerful and precise effort that flew past the outstretched arms of Franch and into the right side of the net.

Once ahead, the Courage managed to protect their lead thanks to solid defensive play by their back four and goalkeeper Sabrina D’Angelo. Minutes after Debinha’s go-ahead goal, Portland’s Midge Purce appeared to be in on goal but D’Angelo came off of her line and disrupted the attack.

Frequently in control of the possession, the Courage had numerous scoring opportunities in a scoreless first half. Less than two minutes into the game, forward Jessica McDonald made a run to the end line before sending in a cross to Lynn Williams, who couldn’t quite manage to make solid contact with the ball.

As the half wore on, the Courage continued to cause havoc for Portland’s back line and new Courage star Crystal Dunn impressed, frequently setting up her teammates with crisp and ambitious passes.

The best scoring opportunity of the first half came in the 37th minute, when McDonald, positioned just a few yards away from the goal, headed a cross from Debinha on target but saw it saved by Franch.

The Courage return to Sahlen’s Stadium at WakeMed Soccer Park to take on Sky Blue FC on Saturday, March 31 at 3:30 p.m. The Courage went 1W-1L-1D against Sky Blue in 2017.

In addition to giving the Courage a lead they would not let up, Debinha’s decisive strike helped the home team settle back into the game after Portland saw more of the ball during the first portion of the second half than it did in the first half.

- Saturday’s match marked the Courage debuts for the following three players: Crystal Dunn, Merritt Mathias and Darian Jenkins. The match was also the first professional game for Jenkins, who missed the entirety of the 2017 season due to injury.
- Debinha’s goal was the fifth of her Courage career.
- With the win, the Courage improved to 2W-2L-0D against the Thorns FC since relocating to Cary.
- All four games played between the NC Courage and the Portland Thorns FC have ended with a score of 1-0
- The Courage improved to 10W-3L-0D all time at Sahlen’s Stadium at WakeMed Soccer Park with the victory.

Ejections:
NCC: None
POR: None