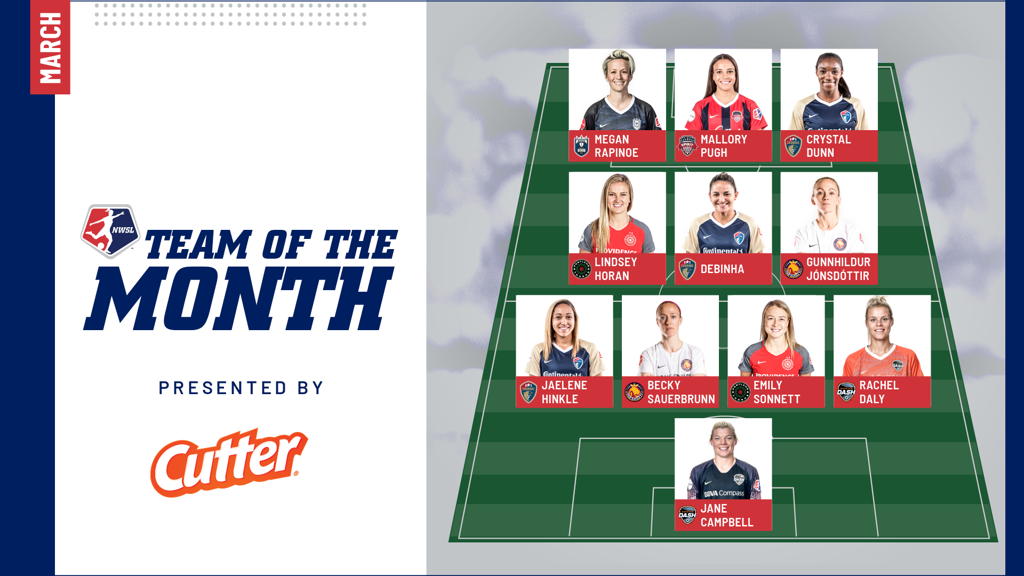 Cary, NC (April 6, 2018) – North Carolina Courage defender Jaelene Hinkle, midfielder Debinha and forward Crystal Dunn have been named to the National Women’s Soccer League (NWSL) Team of the Month, , presented by Cutter® Insect Repellent, voted by the NWSL Media Association for the month of March of the 2018 NWSL season.

Hinkle makes her first Team of the Month appearance after a clutch performance in last week’s match against Sky Blue FC where her through-ball to Jessica McDonald sealed the win for the Courage in added time. She’s played every minute so far for the Courage this season.

Debinha is one of six players on the Team of the Month who also made the opening squad last year. During the NC Courage home opener, she found the game-winning goal in the 70th minute in a hard-fought NWSL Championship Rematch against Portland Thorns FC, making it her second year in a row to do so.

Dunn also makes her Team of the Month debut. The forward joins the NC Courage after spending last season with Chelsea LFC and has already made an impact on the field as she’s created five chances total. Like Hinkle, Dunn has played all 180 minutes for the Courage this season; in the first game, in the midfield against Portland, and in the second as a forward against Sky Blue FC.

The Courage led the way with three players voted to the Team of the Month, followed by the Dash, Thorns and Royals with two each.

NWSL Team of the Month - March

D – Rachel Daly, Houston Dash: Daly featured all 180 minutes in the two games for the Dash in March – leading the team in touches in both matches, with 86 against Chicago on March 25 and 82 versus Utah on March 30.

D – Jaelene Hinkle, North Carolina Courage: Hinkle registered 171 touches, made nine interceptions and gained possession 29 times in two games for North Carolina. She also assisted on the game-winning goal to help the Courage to a 1-0 win versus Sky Blue FC on March 31.

M – Lindsey Horan, Portland Thorns FC: Horan scored one goal in two matches for the Thorns – with her tally helping Portland earn a 3-2 road victory against Chicago on March 31.

M – Debinha, North Carolina Courage: Debinha scored the game-winning goal for the Courage in 1-0 victory over Portland on March 24. She created four scoring chances in the two matches for North Carolina during the month.

M – Gunny Jónsdóttir, Utah Royals FC: Jónsdóttir scored the first goal in club history for Utah Royals FC when she found the back of the net just three minutes into the season opener against Orlando on March 24. The Iceland international played all 180 minutes in both matches for Utah during the month.

F – Megan Rapinoe, Seattle Reign FC: Rapinoe had a goal and an assist to lead the Reign to a 2-1 victory against Washington on March 24 in the only game of the month for Seattle. She also had 11 shots in the performance, which was enough to earn her NWSL Player of the Week and NWSL Player of the Month honors.

F – Mallory Pugh, Washington Spirit: Pugh scored the game-winning goal for the Spirit in a 2-0 victory versus Orlando on March 31. She featured all 180 minutes and created five scoring chances in two matches for Washington during the month.

The NC Courage return to NWSL play on Saturday, April 14 in the team’s first road test of the season against the Washington Spirit which kicks off at 7 p.m. Then, the NC Courage return home to face Seattle Reign FC in a midweek matchup on Wednesday, April 18 at 7 p.m. Tickets can be purchased online at NCCourage.com/tickets or by calling the box office at 919-459-8144.