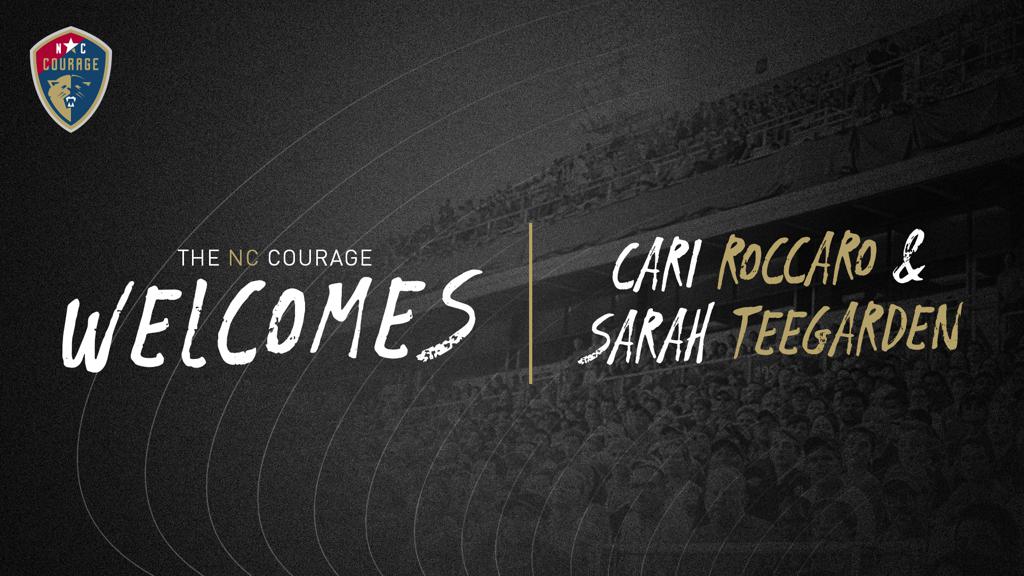 Cary, N.C. (Apr. 12, 2018)- As the North Carolina Courage heads into Week 3 of the 2018 NWSL Season, the team has signed defender Cari Roccaro ahead of Saturday’s road trip matchup against the Washington Spirit. Additionally, the NC Courage has signed midfielder Sarah Teegarden as a National Team Replacement player.

Roccaro spent her 2017 season with the Houston Dash and played in 18 games for 1,500 minutes and began the 2018 preseason with the Dash as well. She was drafted fifth overall by the Houston Dash in the 2016 NWSL College Draft. Before taking her talents to the professional ranks, the East Islip, NY native was a standout at Notre Dame and on the youth national team level as a co-captain for the U-20 US Women’s National Team in 2014.

“Cari needed a change of venue and already she has embraced our culture and identity,” said head coach Paul Riley. “I know her strengths very well having coached her at the youth level. She is simple, constructive, good range of passing and a workaholic. She still has huge aspirations and at this point she needs to be brave, hungry and fearless. She has the talent and now the environment to push her game on. Excited to see how she progresses and confident knowing she will give every ounce of sweat to make this stop on her professional journey a lasting and memorable one.”

Teegarden has trained with the team since the 2018 preseason, and will be on the squad as a National Team Replacement player as midfielder Debinha is on international duty with Brazil in the 2018 Copa America tournament in Chile. Teegarden started every game during her college career at Wake Forest University in Winston-Salem, NC. The midfielder from Monrovia, Calif. played in Sweden last year for Kopparbergs Goteborg FC.

“Sarah survived a tough preseason and has really thrived over the past month,” said Riley. “She has the soccer IQ to help our team navigate through this difficult schedule of games. You can’t replace Debinha, but Sarah is capable of adding physicality, simplicity and toughness to a midfield devoid of Sam Mewis and Debinha. She is a competitor and hungry to make a name for herself, and you know what, don’t bet against her achieving that. She fits in with the character and pulse of the team, and her game has grown already the short time she has been here.”

The NC Courage return to NWSL action this Saturday, April 14 as the team travels to take on the Washington Spirit in its first road test of the 2018 season. Next week, the Courage return to Sahlen’s stadium at WakeMed Soccer Park for back-to-back home games against the Seattle Reign on Wednesday, April 18 and against the Utah Royals on Saturday, April 21. Tickets to the matches can be purchased by calling the box office at 919-459-8144 or online at NCCourage.com/tickets. Fans can enjoy both April home games from the lower sideline for just $20. The Regal Pack is on sale now, and can be purchased by clicking here.