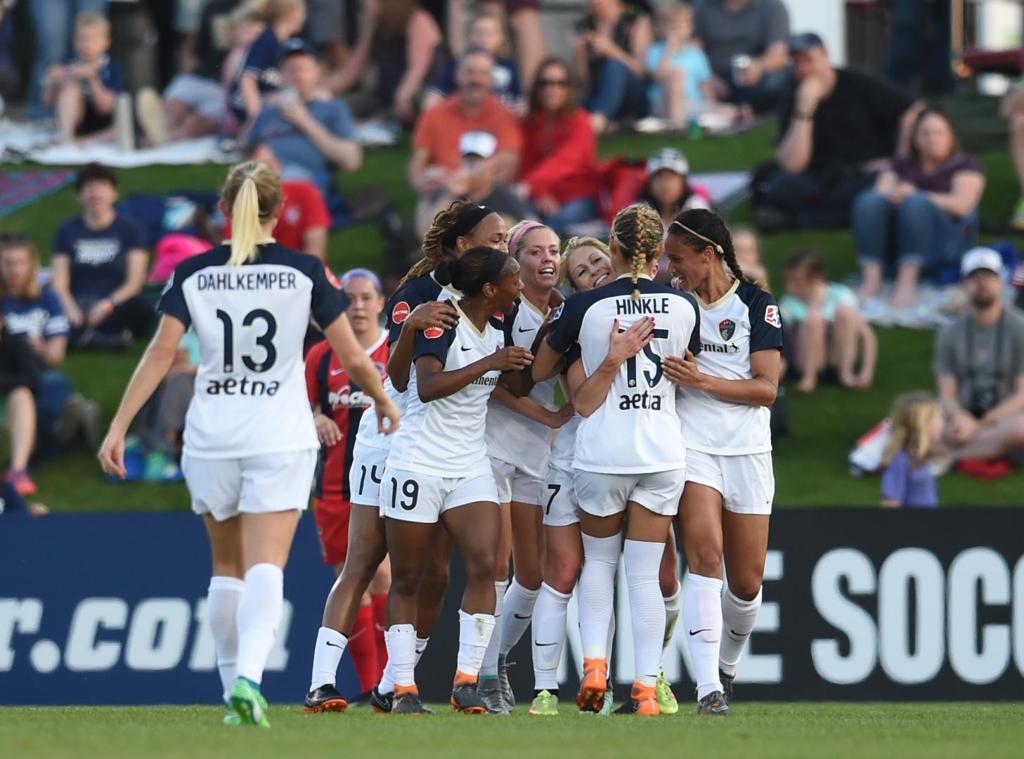 Boyds, Maryland (April 14, 2018)-  The North Carolina Courage (3W-0D-0L, 9 pts) maintained their top spot on the NWSL table in the team’s first road game of the 2018 season. A brace from McCall Zerboni bookended by goals from Crystal Dunn and Lynn Williams combined to give the Courage the clear 4-2 victory in tonight’s matchup against the Washington Spirit (1W-0D-2L, 3 pts).

The NC Courage fell behind early when a defensive mistake opened up scoring for Washington. Mallory Pugh capitalized on an intercepted Courage pass and buried her shot past Sabrina D’Angelo to establish the 1-0 lead for the home side.

The momentum began to shift when Dunn netted her first goal for the team in the 20th minute. Williams played a dangerous ball into the box from the left side, where Jess McDonald was able to flick it on to Dunn who hit her shot by Aubrey Bledsoe to tie the game.

Just four minutes later, Zerboni found the go-ahead goal thanks to a direct free kick outside the 18 that sent North Carolina into the locker room leading 2-1.

In the second half, Zerboni picked up right where she left off and completed her brace in the 48th minute, easily finishing an assist from Kristen Hamilton.

Washington continued to fight, and began their quest for a comeback in the 58thminute when second-half substitute Havana Solaun found Francisca Ordega in the box to close the gap to a one-goal deficit.

When the Spirit began to close in, the Courage locked in the lead. Williams got the fourth Courage goal of the night when she dribbled a pass from Dunn into the centre of Washington's defensive third and rocketed her shot into the bottom left corner past Bledsoe.

Coming up next:
The Courage will play their first midweek game of the season when they host Seattle Reign FC at Sahlen’s Stadium at WakeMed Soccer Park on Wednesday, April 18, at 7 p.m. ET.