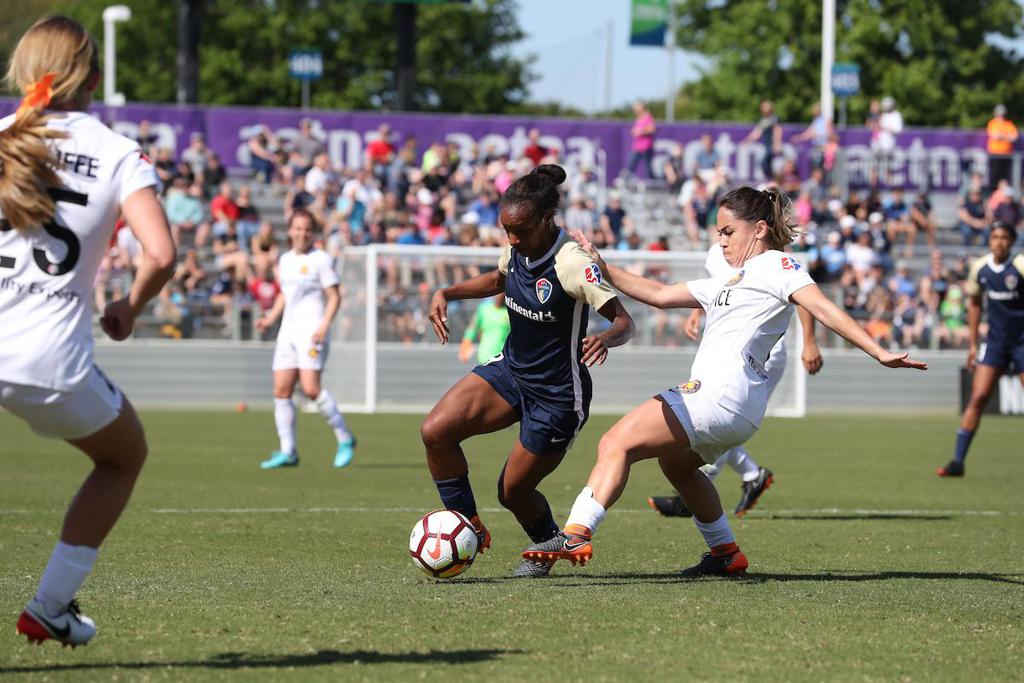 Cary, N.C. (April 21, 2018) – The North Carolina Courage continued its undefeated start to the NWSL season by drawing 2-2 against Utah Royals FC in the first ever matchup between the two teams Saturday afternoon at Sahlen’s Stadium at WakeMed Soccer Park.

“I give the players a lot of credit,” Courage head coach Paul Riley said. “They showed a bit of character coming back. You know, (Royals FC) picked us up on two diagonal balls, really. Other than that, we dominated the game.”

After having to wait until the 70th minute to find the back of the net in a 1-0 win against Seattle Reign FC on Wednesday, the Courage (4W-1D-0L) opened the scoring against Royals FC in just the sixth minute, as right back Merritt Mathias’ wonder strike from about 28 yards out blazed past opposing goalkeeper Abby Smith.

The goal was the first as a member of the Courage for Mathias, who arrived via a trade from Seattle in January.

After the opening goal, the Courage continued to pressure Royals FC and took a lead into the halftime break after firing six shots and controlling 53.5 percent of the possession in the first half.

Royals FC drew even, however, seven minutes into the second half when forward Katie Stengel headed home the equalizer against the run of play.

The Courage nearly retook the lead in the 58th minute, but midfielder Kristen Hamilton’s one-timer off a Jaelene Hinkle corner was corralled by Smith.

The visitors then went ahead in the 66th minute on a strike from forward Brittany Ratcliffe from outside of the 18-yard box.

Showing their resilience, the Courage answered back and tied the game in the 80th minute. After a poor clearance by Smith, forward Crystal Dunn tracked down the ball and fired into an empty net to make the score 2-2, notching her second goal of the season.

After starting the season with four home matches in the first five weeks of the season, the Courage will hit the road to take on the Houston Dash on Saturday, April 28, at 3:30 p.m. ET in the NWSL Game of the Week on Lifetime.

In 2017, the Courage went 2W-0L-0D against the Dash. The Courage won their first road game of the season, a 4-2 triumph at the Washington Spirit on April 14.

As the game wore down, the Courage continued to battle despite playing their third game in one week, and Dunn’s determination led to the home team earning an important point in the standings.

Six of the Courage’s nine goals this season have come in the second half.

“It was one of those balls that you hit, and you’re like ‘Yup, that’s a goal.’ And I looked up right in time to see it go into the upper 90 right hand corner, and I was like, ‘Alright, it was pretty sick.’” – Merritt Mathias on her sixth-minute goal.

– Including the 2017 NWSL playoffs, the Courage are undefeated in their last five matches at Sahlen’s Stadium at WakeMed Soccer Park.

– Katelyn Rowland made her first start in goal for the Courage this season.

– Merritt Mathias’ sixth-minute goal was the Courage’s first first-half goal at home in 2018.

– Darian Jenkins made her fifth appearance as a substitute in 2018.

– Liz Eddy entered the game in the 86th minute for the Courage, marking her first appearance of the season.

– Samantha Mewis made her second consecutive appearance as a substitute after missing the first three matches of the season.

– Royals FC did not register a shot until the 37th minute.