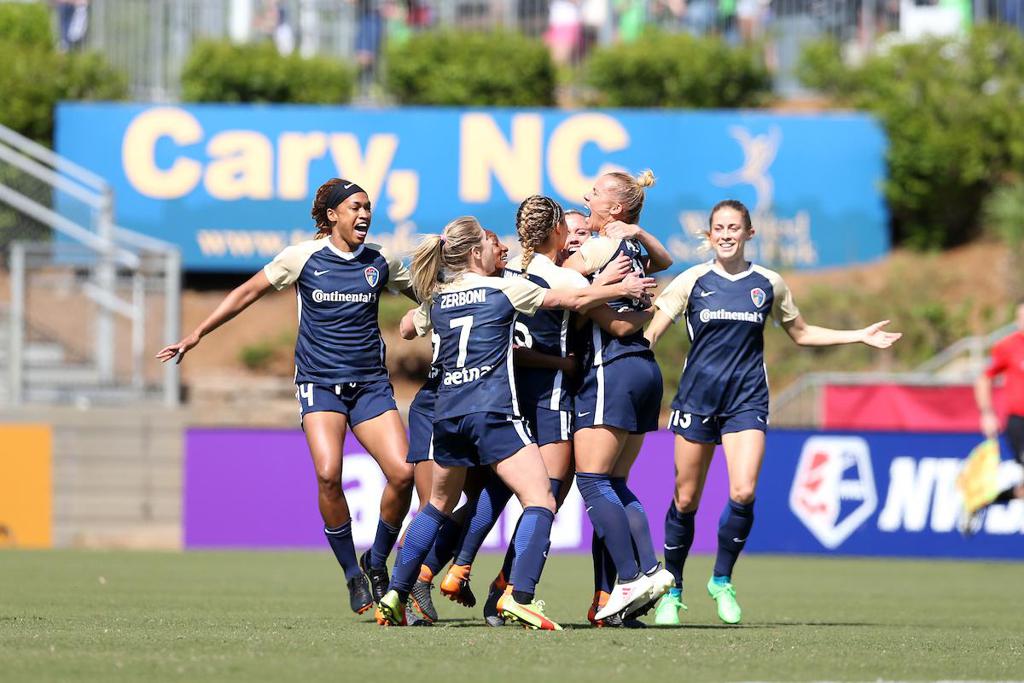 HOUSTON, TX. (APRIL 27, 2018) – After earning seven points in an eight-day span to remain unbeaten, the North Carolina Courage will attempt to continue their strong start to the season as they travel to face the Houston Dash on Saturday, April 28, at 3:30 p.m. ET. For the second time in as many weeks, the Courage will be broadcast to a national audience in the NWSL Game of the Week on Lifetime.

Five games into the season, the Courage (4W-0L-1D) sit atop the NWSL standings with 13 points after earning victories against the Washington Spirit and Seattle Reign FC, and securing a draw against Royals FC between April 13-21. The Courage’s upcoming match against the Dash is only the team’s second game away from Sahlen’s Stadium at WakeMed Soccer Park this season. However, head coach Paul Riley’s team looked more than comfortable in its only previous away match, scoring four times in a two-goal win against Washington two weeks back.

In their most recent match against Royals FC, the Courage took an early lead thanks to right back Merritt Mathias’ NWSL Goal of the Week, an effort that also earned the no. 7 spot on SportsCenter’s Top 10 Plays. In the second half, Crystal Dunn scored her second goal of the season to earn the Courage a draw.

Houston (0W-2L-2D), meanwhile, is still searching for its first win of 2018. The Dash earned draws in their first two matches but have lost two straight and are coming off a 1-0 defeat at the hands of the Orlando Pride.

Series History:
Since relocating to Cary, the Courage are a perfect 2W-0L-0D against Houston. Here’s a recap of what happened when the two clubs met in 2017.

Already ahead 2-0 at halftime thanks to first-half scores by Samantha Mewis and Lynn Williams, the Courage killed the game off with goals from Debinha and Ashley Hatch within the opening 11 minutes of the second half. The Courage also recorded their 12th shutout of the year, which set a new NWSL record.

With a win or a draw against the Dash, the Courage would set a record for the longest unbeaten run in club history.

Players to Watch:
North Carolina Courage – #10 Debinha
The Brazilian midfielder is back in the team after shining on national team duty at the Copa America Femenina. Brazil won all seven of its matches in the competition to secure a spot in the 2019 FIFA Women’s World Cup, and Debinha played her part, scoring three goals during the tournament.

Houston Dash- #1 Jane Campbell
Although the Dash have yet to win in 2018, they’ve been involved in several close games thanks to Campbell, who is in her second season professionally. Campbell has recorded shutouts in both of Houston’s draws, and the Dash’s two losses have each been 1-0 affairs.

Coming Up Next:
The Courage will return home to host the Chicago Red Stars at Sahlen’s Stadium at WakeMed Soccer Park on Sunday, May 6, at 3 p.m. ET.