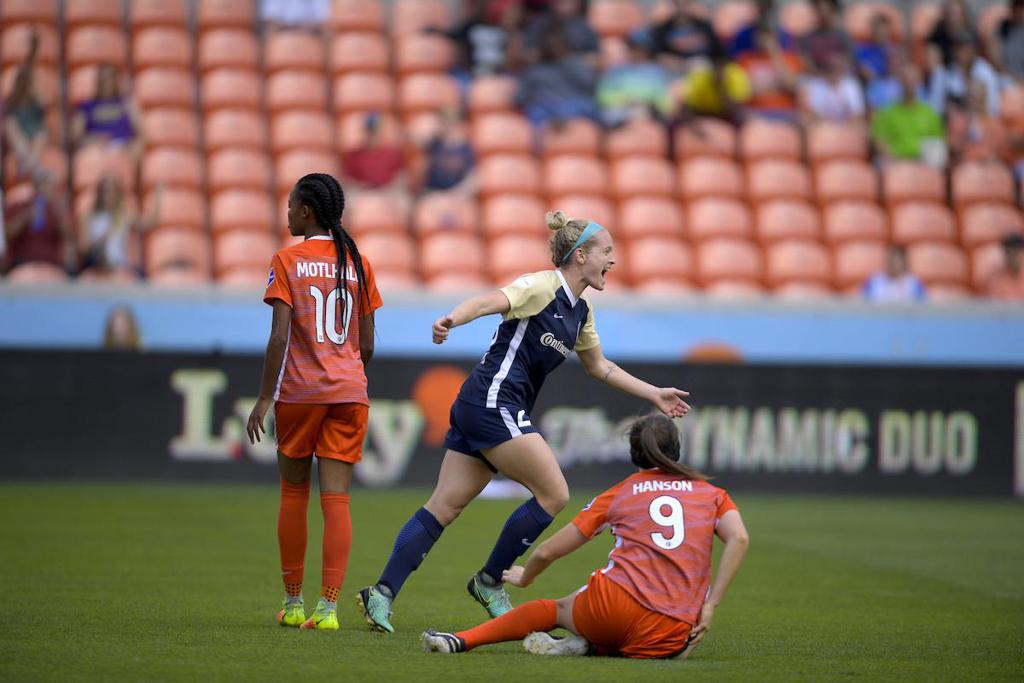 Houston, TX (April 28, 2018)- The North Carolina Courage (5W-0L-1D) are now six games unbeaten in the 2018 NWSL Season thanks to a shutout win over the Houston Dash in today’s NWSL Game of the Week on Lifetime. Goals from Crystal Dunn and Kristen Hamilton locked in the 2-0 win, helping the Courage extend their first-place lead in the league with 16 points.

"Today we were in control of the game," said head coach Paul Riley after the game. "That was our best performance of the season for the full 90 minutes. Anytime you're away from home in this league and get three points, it's obviously been a successful day. I feel like they're maturing into a really good team now."

The NC Courage were quick to find the first goal of the match. In the third minute, Jess McDonald dished a long throw directly into Houston’s box where Crystal Dunn was waiting to capitalize. The forward showed composure and placed her shot past Dash goalkeeper Jane Campbell to put the visiting team up 1-0.

The Courage found themselves on the end of a Dash attack in the 27th minute when a dangerous corner kick fell into the Courage box, forcing Sabrina D’Angelo to make two highlight-reel worthy saves back-to-back to maintain her team’s lead.

The remainder of the first half saw promising attacks from each end, but nothing with enough steam to create a fruitful opportunity on goal. North Carolina controlled nearly 65 percent of possession in the first 45 minutes of the game, and had 14 shots on goal.

Within three minutes of the second half, Kristen Hamilton gave the Courage their second goal of the day. A failed clearance from Houston’s backline fell to Hamilton’s feet and the midfielder seized the opportunity with a rocket of a shot from outside the box to increase the Courage lead to 2-0.

Dunn and Williams looked for more Courage goals in the 68th and 79th minutes, respectively, but Campbell continued to come up with important saves to keep the game within reach for the Dash.

Coming up next:
The Courage will return home to host the Chicago Red Stars at Sahlen’s Stadium at WakeMed Soccer Park on Sunday, May 6, at 3 p.m. ET.