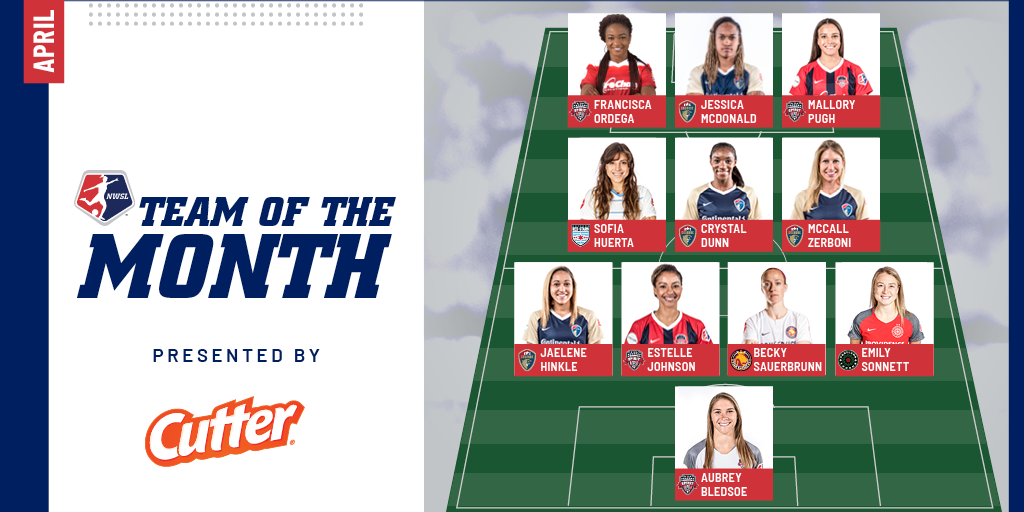 CHICAGO (May 3, 2018) –  North Carolina Courage players Jaelene Hinkle, Crystal Dunn, McCall Zerboni and Jessica McDonald have been named to the National Women’s Soccer League (NWSL) Team of the Month, presented by Cutter® Insect Repellent, voted by the NWSL Media Association for the month of April of the 2018 NWSL season.

With her second consecutive selection this season, Sauerbrunn is the first player to make five appearances on the Team of the Month for the most by any player.

The Courage and Spirit led the way with four players voted to the Team of the Month, followed by the Red Stars, Thorns and Royals with one each.

NWSL Team of the Month – April

GK – Aubrey Bledsoe, Washington Spirit: Bledsoe made 15 saves over three appearances – including a penalty kick save to preserve a 1-1 draw at the Portland Thorns FC on April 20.

D – Emily Sonnett, Portland Thorns FC: Sonnett started all three matches during the month and made 12 clearances, won three tackles and blocked one shot to help the Thorns FC finish April with 1.30 goals-against-average.

D – Jaelene Hinkle, North Carolina Courage: Hinkle played all 360 minutes for the Courage in April as she registered 9 chances created and 12 tackles won, and 244 touches over four appearances.

D – Estelle Johnson, Washington Spirit: Johnson made four tackles (three won) and blocked four shots while recording 40 or more touches in a match in two of her three appearances during the month.

D – Becky Sauerbrunn, Utah Royals FC: Sauerbrunn played every minute of all three games for Utah Royals FC during April as she recorded five tackles won and contributed to one shutout as the club posted a 0-1-2 record.

M – Crystal Dunn, North Carolina Courage: Dunn scored three goals and added an assist to lead the Courage to a 3-0-1 record in April. She scored the game-winner in North Carolina’s 2-0 win over the Houston Dash on April 28.

M – McCall Zerboni, North Carolina Courage: Zerboni had two goals while playing 360 minutes during the month for the Courage, including winning Player of the Week twice.

F – Jessica McDonald, North Carolina Courage: McDonald tallied one goal and two assists in four appearances. The first came against the Spirit on April 14 and the second was a game-winning assist vs. Dash on April 28.

F – Francisca Ordega, Washington Spirit: Ordega scored three goals during the month to push her to second place on the Goals leaderboard on the season. Even more impressive on the other end, she won 11 of 12 tackles.

F – Mallory Pugh, Washington Spirit: Pugh contributed on both offense and defense as she registered one goal and an assist along with a 76.83 percent passing accuracy and five tackles in three games during the month.

The NWSL will return to action Saturday, May 5 with Portland Thorns FC taking on the Seattle Reign FC in the NWSL Game of the Week on Lifetime at 3:30 p.m. ET. It will be followed by Sky Blue FC versus the Houston Dash at 7 p.m. ET and later the Utah Royals FC against the Washington Spirit at 9 p.m. ET. Then on Sunday, May 6, North Carolina Courage face off against Chicago Red Stars at 3 p.m. ET.