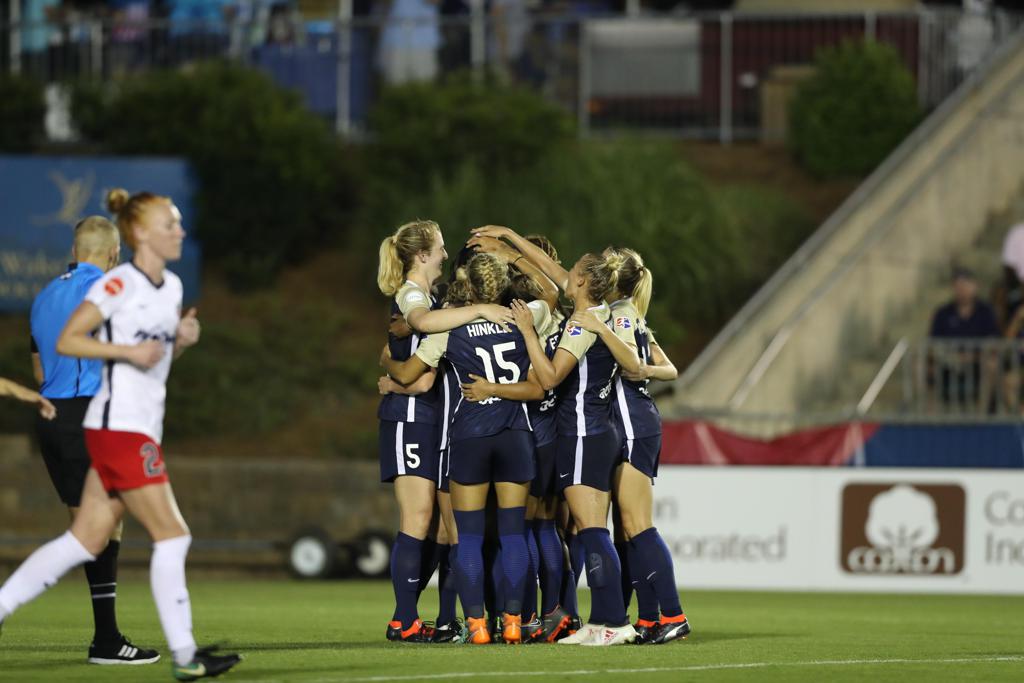 CARY, N.C. (May 12, 2018) – The North Carolina Courage made the most of its final home game before a lengthy road trip, winning 1-0 over the Washington Spirit Saturday night at Sahlen’s Stadium at WakeMed Soccer Park thanks to center back Abby Erceg’s 63rd minute match-winning header.

With the win, the Courage (6W-0L-2D) remain the only unbeaten team remaining in the NWSL and are now 2W-0L-0D against Washington in 2018.

“I thought it was a really good performance,” Courage head coach Paul Riley said. “I thought we dominated the game. The midfield was very, very good, and I think having Sam [Mewis] back helps us a lot.”

Despite being held scoreless in the opening half, the Courage produced several great opportunities during the first 45 minutes.

In just the third minute of action, midfielder Samantha Mewis played in forward Crystal Dunn with a curling pass that Dunn tracked down and fired on goal, only to see the effort saved by Washington goalkeeper Aubrey Bledsoe. In the 17th minute, Erceg’s header off left back Jaelene Hinkle’s free kick nearly put the Courage ahead, but her effort rose above the crossbar at the last second.

After two shots on target from midfielder Debinha, Dunn came tantalizingly close to breaking the deadlock in the 37th minute. Positioned at the top of the 18-yard box, Dunn cut inside to give herself room to let off a left-footed shot, which was goal-bound before Bledsoe went down and got a fingertip on it.

Courage goalkeeper Katelyn Rowland, who made her second start of the season, impressed and kept the Courage’s clean sheet intact with a pair of crucial saves in the 48th minute. Unmarked on a free kick, Washington’s Tori Huster had a great opportunity to score from just a few yards out, but Rowland managed to block the effort and denied Mallory Pugh’s second-chance opportunity, too.

Eventually, the Courage broke through in the 63rd minute thanks to Erceg, who made sure to put her second header of the night on frame. After right back Merritt Mathias was taken down just outside of the box, Hinkle played in a precise ball on the ensuing free kick, which Erceg tracked down and flicked into the left corner of the net.

For the New Zealand international, the goal was her first since scoring on May 27, 2017, against the Chicago Red Stars.

From that point on, the Courage managed to see the game out, earning their sixith win of the season.

Up Next:
The Courage will soon begin a four-match road trip, their longest of 2018. First up is a visit to Piscataway, N.J., to face Sky Blue FC on Saturday, May 19, at 7 p.m. ET. In their second game of the season, the Courage defeated Sky Blue FC 1-0 on March 31 behind a 92nd minute game-winning goal from Jessica McDonald.

Game Changer:
Rowland’s pair of back-to-back saves in the 48th minute proved to be crucial. Despite the Courage controlling much of the action, the Spirit had a clear opportunity to take a lead, but Rowland was up for the challenge. Fifteen minutes later, the Courage gave her a lead to protect, which she did.

Key Stat:
The Courage have recorded shutouts in five of their eight games this season.

They Said It:
“It was good, especially having missed that first one that was sitting right there. I made it a little bit hard for myself. But yeah, it feels good. I scored, and obviously happy that we get the three points.” – Abby Erceg on her game-winning goal.

– Saturday marked the return to Sahlen’s Stadium at WakeMed Soccer Park for Washington’s Ashley Hatch and Taylor Smith, both of whom were traded by the Courage during the offseason in exchange for the rights to Crystal Dunn. In 2017, Hatch earned NWSL Rookie of the Year honors after scoring seven goals, and Smith recorded two assists at right back.

– Since moving to Cary, the Courage are 5W-0L-0D against the Spirit.

– Midfielder Samantha Mewis made her second start of the season and played a full 90 minutes for the first time in 2018.