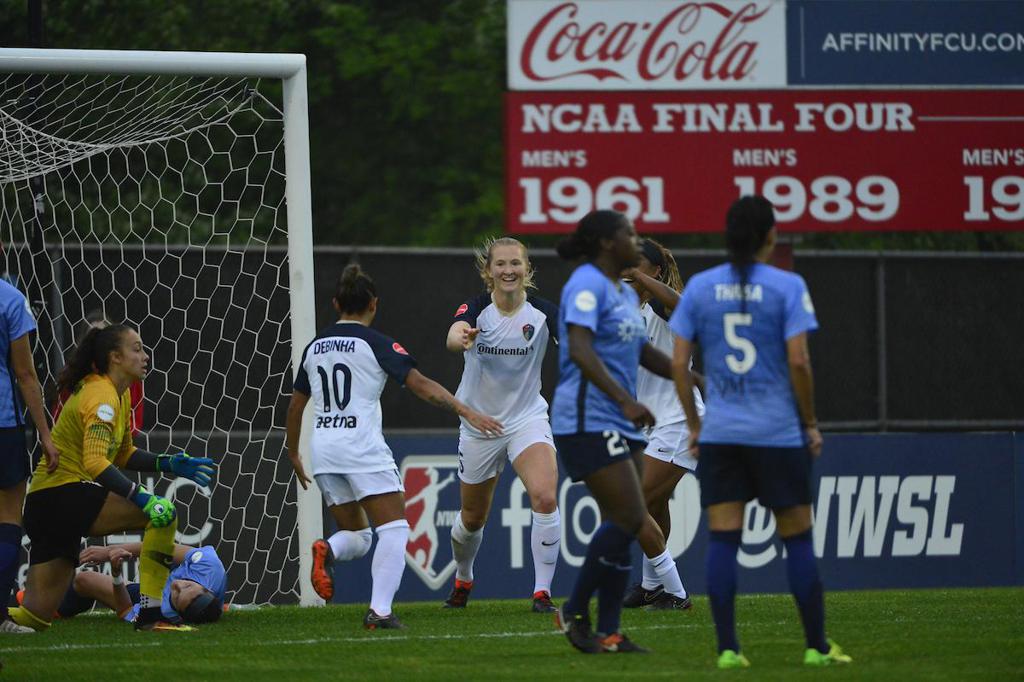 Cary, N.C. (May 19, 2018)- The North Carolina Courage (7W-0L-2D) defeated Sky Blue FC (0W-5L-1D) for the second time this season to increase their league lead to a total 23 points in nine games. The 2-1 win also tied an existing NWSL record for best nine-game start to a season, a record that has been held by Seattle Reign FC since 2014.

Goalkeeper Katelyn Rowland was called to duty early when Sky Blue FC’s Shea Groom launched a shot from outside the 18-yard box in the sixth minute of play. Rowland, in her third start of 2018, made a leaping save to prevent the home team from taking the quick lead.

The NC Courage were on the board soon after Rowland’s heroics when Debinha forced a turnover in the midfield and found the feet of Jessica McDonald on the right flank. McDonald then played a clinical ball to Crystal Dunn who was inside the box in perfect position to put the first goal of the game away in the 16th minute.

In the 27th minute, the NC Courage increased their lead as midfielder Samantha Mewis scored her first goal of the season. Traffic in the box forced Sky Blue FC goalkeeper Kailen Sheridan to give up a dangerous deflection, and Mewis capitalized on her rebound to extend the lead to two.

Rowland continued her stand-out performance into the second half when in the 72nd minute, the keeper snuffed Carli Lloyd’s penalty kick attempt and then made a follow up save to deny a shot off the rebound.

However, it would be Lloyd who eventually found the back of the net for Sky Blue FC off of a set play in the fourth minute of added time. The midfielder ripped a shot into the top corner past Rowland to deny the Courage a shut out.

Though the visitors did not see a goal in the second 45 minutes, the team continued to create opportunities, increasing their first-half stat of 16 shots to 28 by the final whistle.

Despite the late goal from Sky Blue FC, the Courage’s first two were enough to clinch the team’s seventh win of the season.

The NC Courage will travel to face the Orlando Pride for the first time in 2018 in a midweek matchup in Orlando, Fl. On Wednesday, May 23. This match will be the second of four consecutive road games for the NC Courage.