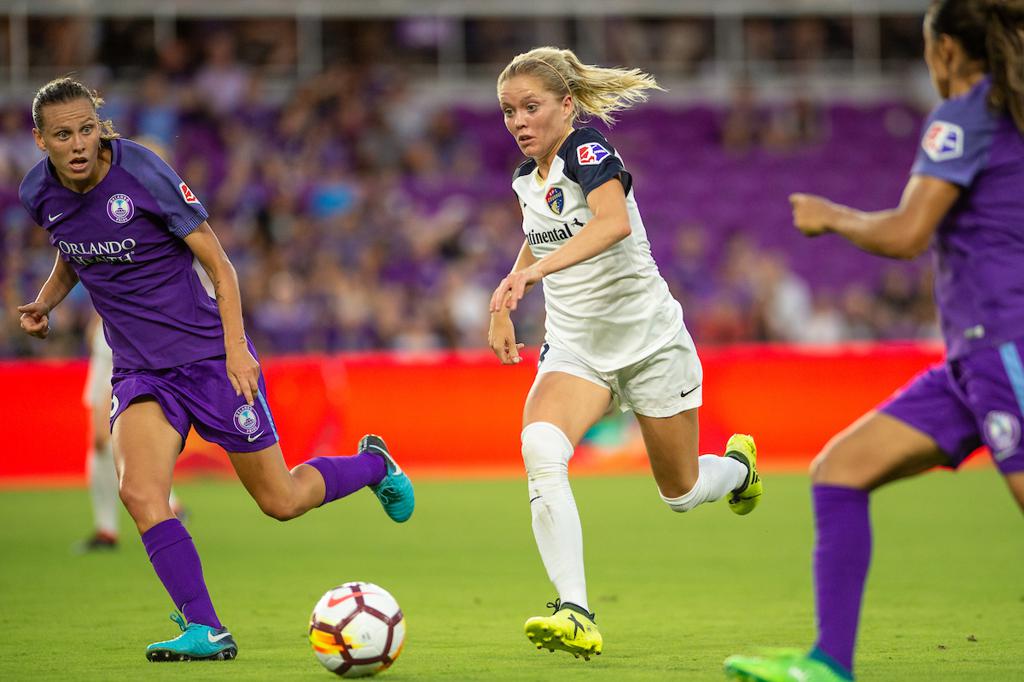 Cary, NC (May 23, 2018)- The North Carolina Courage (8W-0L-2D) are now ten games unbeaten after tonight’s 4-3 victory over the Orlando Pride, and have extended their league-lead to a total 26 points. A brace from Jessica McDonald paired with goals from Debinha and Samantha Mewis proved to be enough to top a high-scoring performance by their opponents.

Tonight’s seven total goals were the most the league has seen in a game this season.

The NC Courage created several chances in the opening minutes of the game, including a goal from Crystal Dunn that was later called back as the linesman deemed the forward offside. Just minutes later, Dunn nearly found the net again, but her shot hit the post in the ninth minute.

Relentless in their attack, McDonald and Dunn connected to cause a dangerous play in the 22nd minute, but Orlando Pride goalkeeper Ashlyn Harris reacted quickly to block the shot with a kick save.

Through persistence, the Courage eventually found their first goal of the night when a frenzy in the box saw Denise O’Sullivan flick a ball to McDonald, who finished her shot past Harris in the 32nd minute.

Coming off of the break, Orlando fought their way back into the game when Chioma Ubogagu found the equalizer in the 53rd minute. Ubogagu beat NC Courage goalkeeper Katelyn Rowland to a ball played towards the goal line by Marta, and tapped it in to even the score one all.

Within the next 10 minutes of the game, three more goals were scored between the two sides in a flurry of attacks.

Debinha found the initial go-ahead goal in the 57th minute when the midfielder beat the Orlando defense in a foot race and fired her shot low towards the corner to make the score 2-1. Just five minutes later, Mewis headed in a cross from Dunn that Harris could not prevent from crossing the line to increase the Courage’s lead to 3-1.

Orlando quickly responded and chipped away at the Courage’s lead with a goal from Alanna Kennedy in the 65th minute as the Australian international finished off a Christine Nairn corner. The Pride once again battled back to tie the game in the 83rd minute when second-half sub Rachel Hill connected with Marta to get past the Courage backline.

The Pride’s efforts were not enough to hold up the league-leader, as the Courage refused to surrender with a draw. It would be Jaelene Hinkle’s service to McDonald in the 90th minute that sealed the last-minute win for North Carolina in the league’s highest scoring game of the season.

Coming Up Next:
The Courage will have a bye this weekend and return to action next Wednesday at the Portland Thorns on May 30 at 10:30 pm ET. The team then makes their final trek to Houston to play the Dash on Sunday, June 3 at 6:30 pm ET.

Match Notes:
- The NC Courage are now unbeaten in 10 games
- With the win at Orlando, the NC Courage snapped a 10-game home unbeaten streak for the Pride
- McDonald scored her third and fourth goals of the season and is now tied for second in the league in goals scored with Dunn