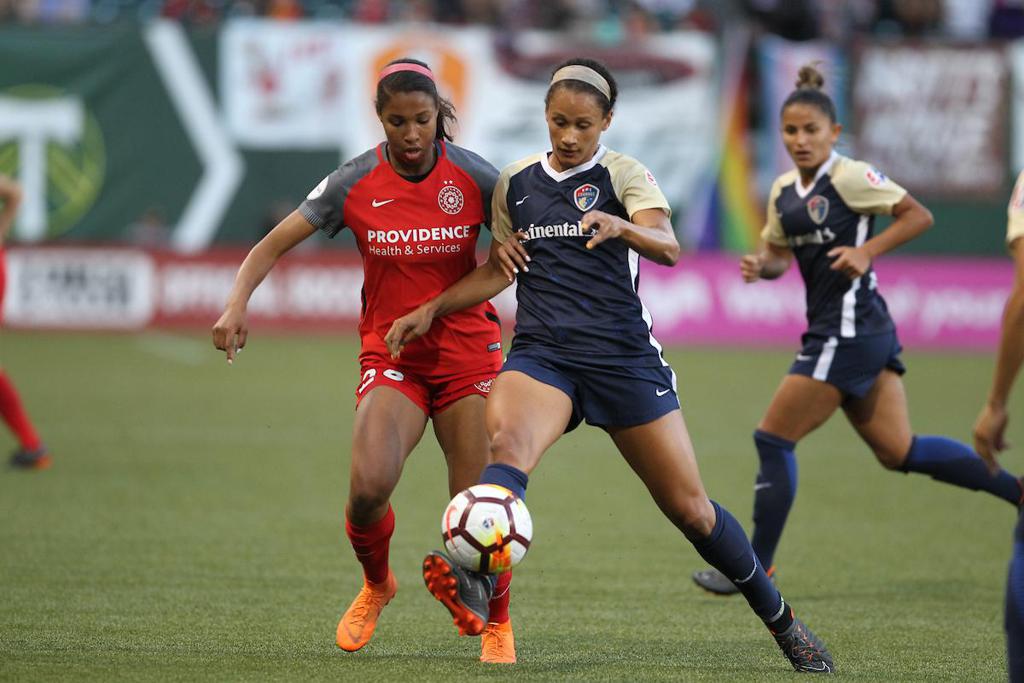 PORTLAND (May 30, 2018) –  The North Carolina Courage (9W-0L-2D) downed Portland Thorns FC 4-1 at Providence Park tonight, earning their fourth win in a row and eleventh game unbeaten in 2018. A Lynn Williams brace highlighted the evening, and goals from Debinha and Samantha Mewis added to the four-goal total.

The first half was filled with back and forth action as both teams saw dangerous moments. Jessica McDonald set up a strong Courage attack in the sixth minute as she beat a defender on the outside flank to play a quality ball across the face of the goal. However, none of her teammates were able to get a foot on it.

Goalkeeper Katelyn Rowland made a crucial play in the 22nd minute when she barreled through a crowd to swallow up a Tobin Heath free kick, snuffing what could have been a key Portland opportunity.

The Courage seized the moment and took the early lead in the 31st minute after midfielder Debinha earned a penalty kick, which Williams then converted.

In the second half, the Courage were relentless in their attack and found themselves up over the Thorns 4-0 in a matter of minutes. Debinha was first to open the flood gates when she found herself unmarked on the end of a Crystal Dunn cross and headed her shot past Thorns goalkeeper Britt Eckerstrom, making the score 2-0 in the 58th minute.

Lynn Williams then netted her second of the night just four minutes later from the same exact spot as Debinha’s goal. The two goals were Lynn’s first since returning from a hamstring injury that kept her sidelined for two matches. All but 180 second passed before Jaelene Hinkle’s corner kick made its way to Mewis inside the box to make the score a solid 4-0.

Amid the flurry of Courage goals, the Thorns got one back as time ticked away, and in her 100th cap, Katherine Reynolds scored her first NWSL goal for the home team.

The NC Courage travel to play Houston for the second time this season on Sunday, June 3 at 6:30 p.m. ET, which will be the team’s fourth road match in 16 days. The Courage then return home on Saturday, June 16 to host Utah Royals FC at Sahlen’s Stadium at WakeMed Soccer Park.