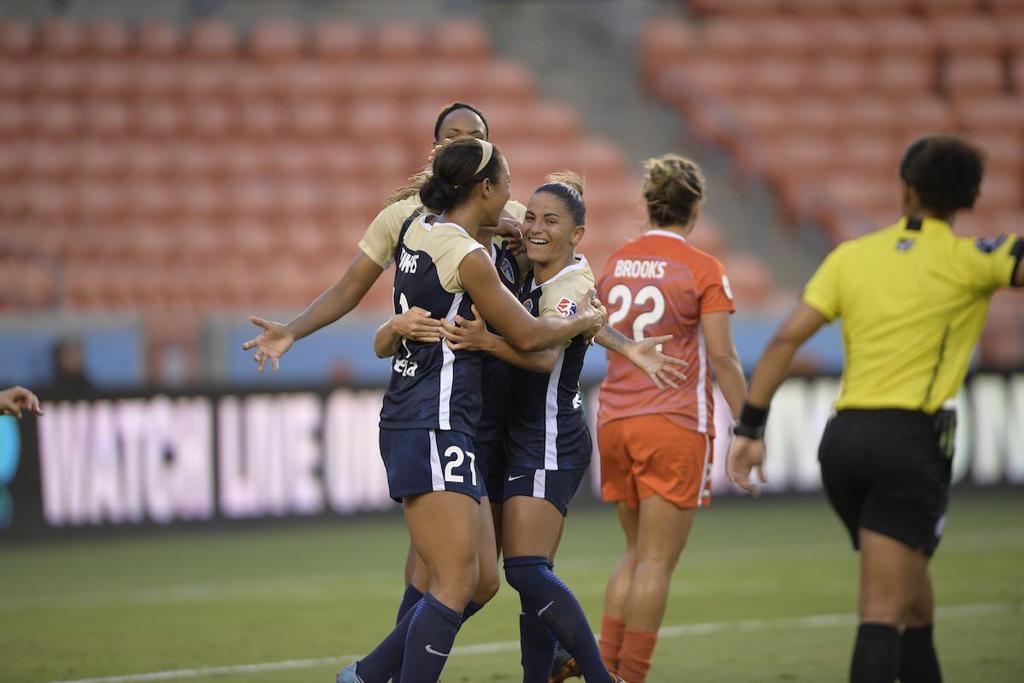 CARY, N.C. (Sunday, June 3) ­­– The North Carolina Courage fought to draw the Houston Dash in their fourth consecutive road game tonight at BBVA Compass Stadium. After finding themselves trailing by one early in the second half, the Courage turned to a new face to provide the late-game heroics as rookie Frannie Crouse netted the equalizer to earn the point.

The Houston Dash came out strong and nearly had the first goal of the game when reigning NWSL Player of the Month Rachel Daly narrowly missed the frame following a through ball from Kyah Simon. Houston would strike again in the 22nd minute, but captain Kealia Ohai’s shot sailed wide after beating her defender.

In the 28th minute, the Courage set up a signature Jess McDonald throw-in opportunity. The forward’s well-known long throw found the head of Abby Erceg in the box, but Erceg’s flick ended up in the hands of Dash goalkeeper Jane Campbell.

The Courage created their first dangerous opportunity slightly later than usual. Debinha got off a solid shot to test Campbell in the 38th minute of play. Liz Eddy drew a foul just outside the box just two minutes later, and Jaelene Hinkle’s free kick service forced Campbell into action once again.

A scrappy first half from both sides remained at a 0-0 deadlock at the end of 45 minutes plus seven minutes of added time.

The Dash were first on the board shortly after the start of the second half. Ohai tore down the left side to put herself in position to shoot past Courage goalkeeper Katelyn Rowland.

Crouse stepped on to the field for the first time in her professional career in the 63rdminute and immediately made her presence known. The first-round draft pick took a dangerous shot on goal in the 65th minute, but her effort went just over the cross bar.

However, Crouse’s moment was far from over. It would be the rookie to find the equalizer for the Courage in the 80th minute. The forward blasted a shot from point-blank range to tie the game 1-1 in her first NWSL appearance.

As the result held, the Courage secured a point on the road, bringing their four-game road series to a total 10 points out of a possible 12, and extending their unbeaten streak to 12 games in 2018.

The NC Courage return home on Saturday, June 16 after an international break next weekend. The team will host Utah Royals FC for the second time in 2018 at Sahlen’s Stadium at WakeMed Soccer Park at 7 p.m. ET.