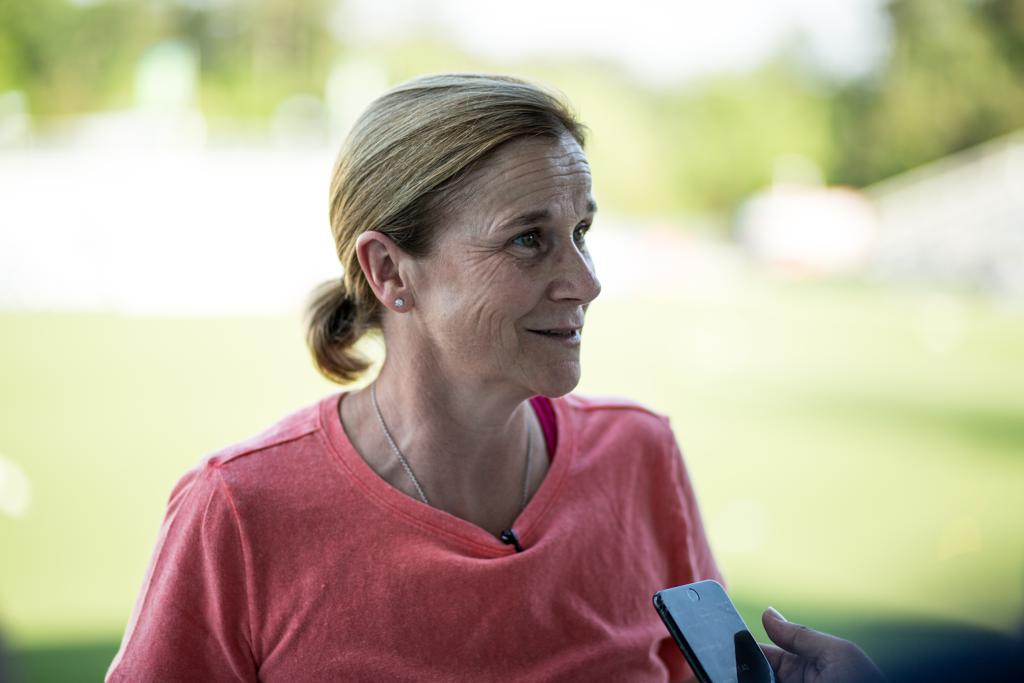 In front of a season-high crowd of 5,866 at Sahlen’s Stadium at WakeMed Soccer Park on May 12, the NC Courage conquered the Washington Spirit in the team’s sixth win of the year. While it’s expected that a crowd of that capacity will undoubtedly provide a spark to the play on the field, there was one spectator in the stands who was sure to be on the player’s minds.

U.S. Women’s National Team head coach Jill Ellis attended the match to analyze potential talent to add to her roster as she prepares for the two international friendlies against China that are set for June 7 in Sandy, Utah and June 12 in Cleveland, Ohio.

“I think it’s important for me to go out to the venues,” said Ellis in a pregame interview with North Carolina Courage staff. “We’ve got a lot of players here that have been in with our senior team. So, to come and look at players and hopefully watch a great game today.”

The National Women’s Soccer League has been the perfect stage for athletes to showcase their skill and development, and several players have caught Ellis’ eye as a result of successful league play. With continuous league play also comes the need for recovery and wellness management, an important component that Ellis takes into account when choosing her high-caliber roster.

“We usually pick a roster about two weeks out before the games,” she continued. “I think that allows players that have picked up some injuries some time to heal, and then we start to look at depth and what we need. I think the players are going to be played in because obviously they are in the middle of the league season, and I think when we get back together it’s a little bit of rest initially; get the legs back under them and then obviously prepare for China. It’s going to be a good team; very organized.”

Ellis will return to Cary, N.C. in October, but she will be bringing with her a team looking to qualify for the 2019 FIFA Women’s World Cup. The 2018 Concacaf Women’s Championship will be the United States second visit in a year and eighth overall since 2002 and will be held at Sahlen’s Stadium at WakeMed Soccer Park between October 4-17. The venue selection is a testament to the first-class facilities that the Town of Cary offers at WakeMed Soccer Park and Sahlen’s Stadium.

“A big part of [the USWNT coming here] is this venue,” Ellis echoed. “Its surface and the fan support we get are a big reason why we come back here. I think it’s a soccer area. There are people that come and cheer on their national team. The field is always fantastic. Our players love playing here. I think we’ve done OK here in the past, so I think it’s going to be a great venue for qualifying. I think the fan support is what we’re looking for in terms of pushing us over the edge.”

The U.S. Women’s National Team has never lost in Cary, outscoring their opponents 25-3. Additionally, WakeMed Soccer Park has been the only North Carolina venue the team has played in since 2002.

Ellis’ ties to the Triangle run deep. From 1988 to 1990 she was an assistant coach at NC State where she helped the Wolfpack win the very first ACC Tournament in 1988, a year in which they also reached the NCAA Final Four. Ellis has seen first-hand the development of the area into the soccer powerhouse that it is now. As of last year, the Triangle is home to the largest youth-to-pro club in the nation, boasting over 14,000 participants from the youth level up to the professional ranks.

“It’s massive,” she said when talking about the growth of the sport in the area. “A friend of mine has one of the local clubs, and the numbers he tells me about participation are just off the charts. This area is producing players, and obviously now there’s an NWSL team here that’s doing very well. Then you have the universities and the colleges – three in such a tight area, all with good programs. This has always been kind of a hub and an area that gets behind the sport and loves it. I just think the game is popular and this is a hotbed for the area.”

While Ellis visited Cary to primarily scout players, she also couldn’t help but take note of NC Courage head coach Paul Riley’s continued success. He has played a key role in the development of several of Ellis’ national team mainstays such as Samantha Mewis, Abby Dahlkemper, Lynn Williams and Crystal Dunn, but has also helped USWNT newcomers and hopefuls reach their goals which is proven in the call-up of McCall Zerboni and Merritt Mathias for the upcoming friendlies on June 7 and June 12.

“I’ve known Paul for a long time,” she said. “I remember when he took Western New York before they moved here. He just gets the very most out of his players. He energizes them with his own energy. I think he’s a very enthusiastic coach; very organized in terms of what he expects and wants out of his players. He gets a group of players that are maybe individuals, and he really blends them into becoming a team. So, he’s done a great job and I think his players believe in what they’re doing.”

Sahlen’s Stadium at WakeMed Soccer Park will stage Group A of the Concacaf Women’s Championship on October 4, 7 and 10. Ticket information for the tournament will be made available once it is finalized at ussoccer.com. The North Carolina Courage will return home on Saturday, June 16 to host Utah Royals FC at 7 p.m. ET. Tickets to the match can be purchased by calling the Coastal Credit Union Box Office at 919-459-8144 or online at NCCourage.com/tickets.