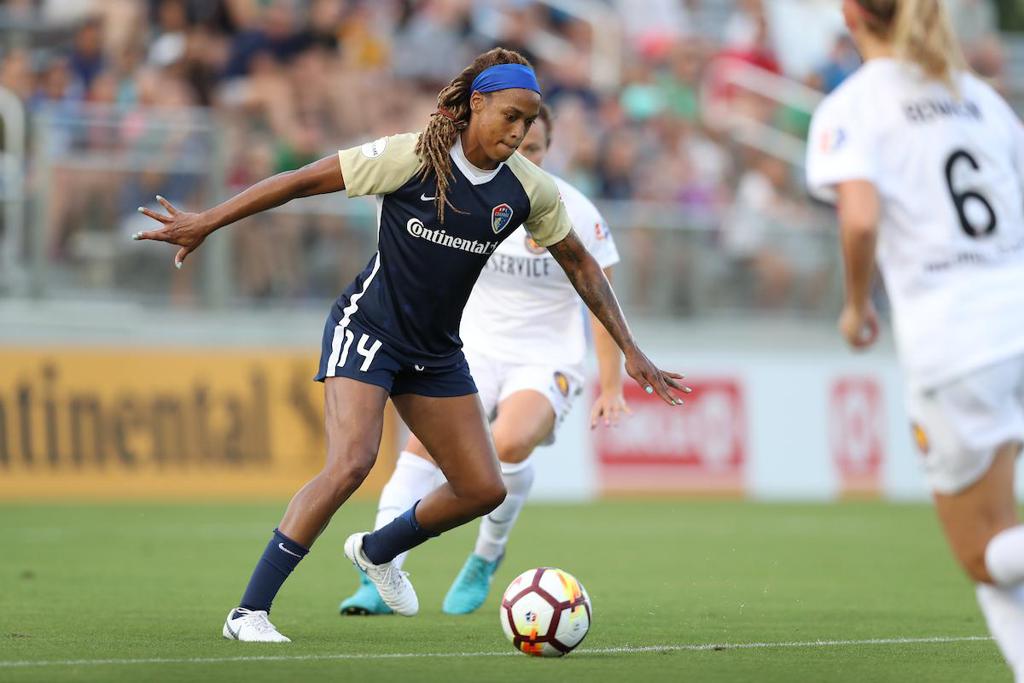 CARY, N.C. (June 16, 2018) –  Playing at home for the first time in five weeks, the North Carolina Courage saw its 12-game unbeaten streak come to an end, as it fell 1-0 to Utah Royals FC Saturday night at Sahlen’s Stadium at WakeMed Soccer Park.

Despite the result, the Courage (9W-1L-3D, 30 points) remain atop the NWSL table, 11 points clear of Seattle Reign FC.  With a scoreless draw looking like the likely result, Utah snatched a late winner with Brittany Ratcliffe’s 94th-minute goal against the run of play.

“As they say, you need to lose,” Courage head coach Paul Riley said. “We’ll see what we’re made of as a group, and I think it’s good for adversity – you have to have it at some point, and sooner than later, so we can regroup again. We’ve got great character in the group, and we go on the road now for two really tough games.”

From the get-go, Riley’s team was forced to deal with a stingy Utah defense that moved well as a unit and allowed nothing to come easy for the Courage. Entering the match, Utah had allowed only eight goals through 10 games, tied for the fewest in the league.

Yet, the Courage nearly took an early advantage in the 11th minute when left back Jaelene Hinkle played in a curling cross from the left flank that forward Jessica McDonald went up for, but headed high.

As the half progressed, few chances came about for either side, but forward Crystal Dunn threatened Utah goalkeeper Abby Smith with a shot on target in the 32nd minute. Link-up play between Dunn and midfielder McCall Zerboni led to Dunn letting loose on a shot from the right side of the 18-yard box, but Utah’s Smith had it covered.

On the other end, Utah registered only one shot on frame during the opening 45 minutes, and both teams went into halftime scoreless.

Out of the locker room, the Courage earned the better of the chances, and Dunn came extremely close to giving her team a lead in the 63rd minute. Given the ball off of a short corner, Dunn took her defender on directly, cut into the box and released a left-footed effort that curled and looked destined for goal before it bounced off the crossbar.

Only seven minutes later, second-half substitute Denise O’Sullivan was also unlucky to see her one-timed volley of a Debinha cross hit the crossbar as well.

Searching for a winner, the Courage kept up the pressure and center back Abby Erceg’s header from close range in the 88th minute looked goal-bound, but the effort was blocked by a Utah defender.

After the visitors went ahead deep into stoppage time, the Courage had one last chance to get on the board, but right back Merritt Mathias’ strike rose above the crossbar.

Up Next:
The Courage, which just came off a four-match road swing, will hit the road again to take on the Seattle Reign FC on Saturday, June 16 at 4 p.m. ET.

A 70th-minute goal from McDonald powered the Courage to a 1-0 win over Seattle in April.

Game Changer:
After a first half that featured little action in front of goal, the Courage increased the offensive pressure out of halftime, and were especially dangerous between the 60th and 70th minutes.

During that span, both Dunn and O’Sullivan came tantalizingly close to putting the Courage ahead, only to be denied by the woodwork. If either one of those shots found the back of the net, the game could have played out much differently.

Key Stat:
Between Dunn and O’Sullivan’s near-goals, the Courage hit the crossbar twice.

– Saturday’s loss was the Courage’s first in the regular season since September 30, 2017.

– Goalkeeper Katelyn Rowland made her sixth start for the Courage, her fifth in as many games.

– Crystal Dunn, Samantha Mewis and McCall of Zerboni, all of whom played for the U.S. women’s national team in its recent friendlies against China, started for the Courage. Abby Dahlkemper, who also played for the USWNT, did not play against Utah. Republic of Ireland international Denise O’Sullivan came on as a substitute in the 59th minute.