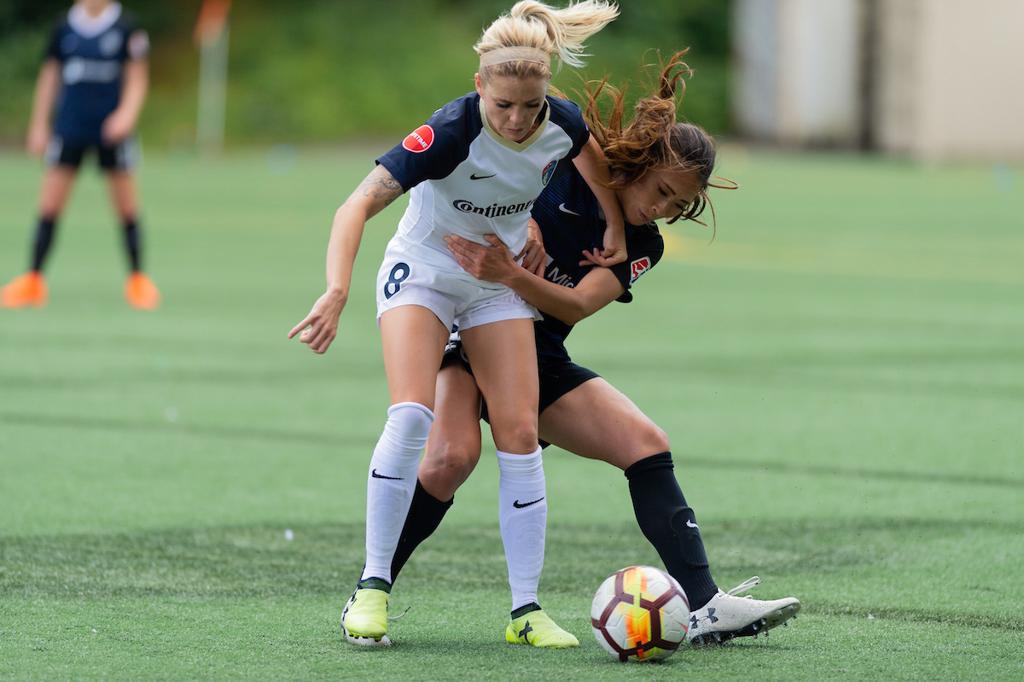 CARY, N.C. (June 23, 2018) - The North Carolina Courage (10W-1L-3D, 1st place) made a statement in Seattle, defeating Seattle Reign FC (5W-3L-4D, 3rd place) 4-1 today to extend their league lead to 33 total points. A Crystal Dunn brace highlighted the match, while a tally from Lynn Williams and Merritt Mathias each combined to give the NC Courage one of their highest-scoring victories in team history.

The NC Courage opened up the match with several opportunities in front of Seattle’s goal. Just seven minutes into the game, the Courage were awarded a penalty kick after a handball in the box. Williams stepped up to take the kick, but her shot was blocked by an alert Lydia Williams to keep the score tied at zero early.

The Reign found the board first when Megan Oyster got on the end of Megan Rapinoe’s free kick in the 18th minute. However, the NC Courage did not trail for long, and Williams sought to make up for her saved PK. She netted the 28th goal of her NWSL career, heading in a cross from Jaelene Hinkle in the 27th minute.

After the equalizer, the Courage continued the intense offensive pressure, creating several chances in a span of minutes following their goal, including a shot from Debinha that deflected off the cross bar. The team’s attempts would pay off again in the 33rd minute thanks to a rocket from Dunn giving the Courage a 2-1 lead over Seattle to end the first half.

North Carolina carried over their goal-scoring frenzy into the second half as Merritt Mathias took it upon herself to give the Courage a two-goal lead. The outside back dribbled nearly 20 yards before ripping a shot into the back of the net past Williams in the 48th minute.

The scoring persisted into the 70th minute when Williams and Dunn linked up in the attacking third to give Dunn her first brace as a member of the NC Courage. With the final score of 4-1, the NC Courage re-established their league dominance, and locked in their 10th win of 2018.

The Courage close out its two-game road swing against the Orlando Pride on Saturday, June 30, at 3:30 p.m. ET in the Lifetime NWSL Game of the Week.

On May 23, the Courage won a seven-goal thriller in Orlando, with McDonald providing the game-winner in the 90th minute of the 4-3 victory.