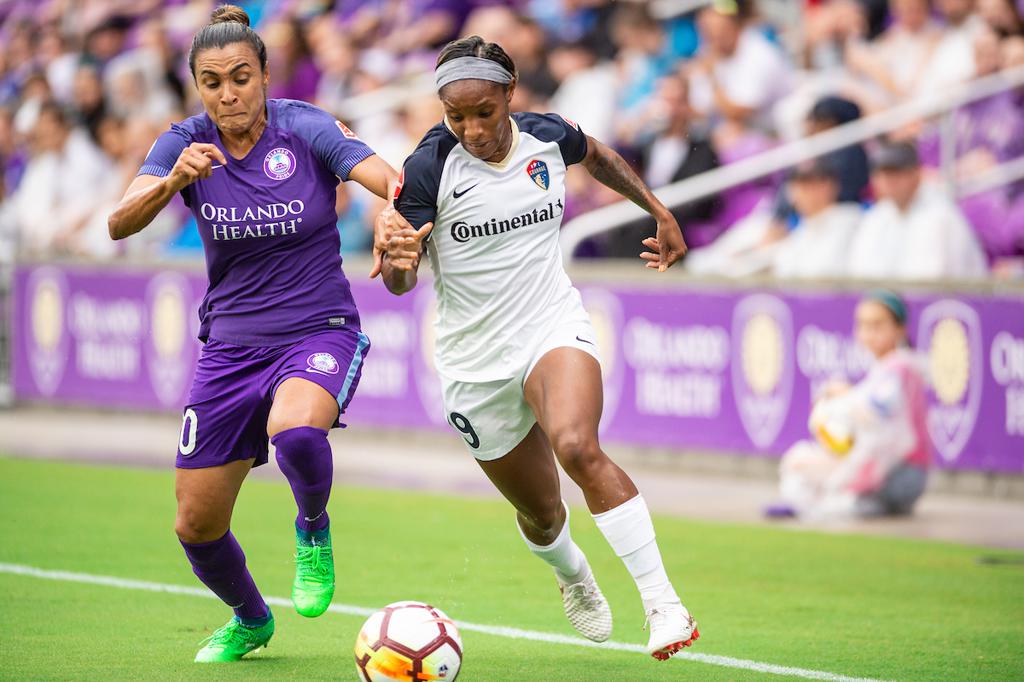 Orlando, Fla. (June 30, 2018)- The North Carolina Courage (11W-1L-3D, 36 pts.) shutout the Orlando Pride 3-0 today in the NWSL Game of the Week on Lifetime at Orlando City Stadium. For the second week in a row, the Courage downed the league’s second-place team by a margin of three goals, this time thanks to tallies from Debinha, Merritt Mathias and Jessica McDonald.

North Carolina put up a solid performance in the opening minutes of the match. While they did not find the back of the net, the team created several opportunities thanks to seamless passing which helped them maintain possession.

McDonald would be first to unleash a deadly attack for the Courage when in the 15th minute, Crystal Dunn slotted a ball into McDonald behind the Pride’s backline. McDonald’s shot went just over the crossbar, but her pressure was followed by more opportunities for the Courage.

Dunn went on to take a shot herself in the 18th minute, but a stellar save from Orlando’s goalkeeper Ashlyn Harris kept the score tied at zero.

The Courage then opened the floodgates to what would become their fastest scoring streak in the 2018 season. In a span of three minutes, the Courage netted three goals before the half. Debinha sparked the fire storm in the 37th minute when she finished off a chipped ball from Dunn that bounced around in the box before finally settling at the Brazilian’s feet.

Next, Merritt Mathias got in on the action, scoring her third goal of the season from outside the 18-yard box, this time off of a pass from Debinha. Just one minute later, McDonald would put the exclamation point on the Courage’s first-half performance, one touching a through-ball from Dunn past an outstretched Harris.

The second half saw equal opportunities from both sides with two lethal chances being created by Orlando in the 57th and 60th minutes. In the latter, Alex Morgan’s point-blank shot rebounded off the post.

The NC Courage followed up just minutes later with a valiant effort from Lynn Williams in the 67th minute, whose shot soared just over the crossbar. Debinha then unleashed a rocket that was headed for the top right corner, but her attempt missed the frame by inches. The three goals in the first half proved to be enough for the Courage who clinched their 11th win of the 2018 season and lengthened their league lead to 36 points.

The Courage return home to Sahlen’s Stadium at WakeMed Soccer Park for a mid-week game against the Chicago Red Stars on Wednesday, July 4, at 7:00 p.m. ET.

On May 6, the Courage and Red Stars played a hard fought match at WakeMed Soccer Park that resulted in a 1-1 draw.