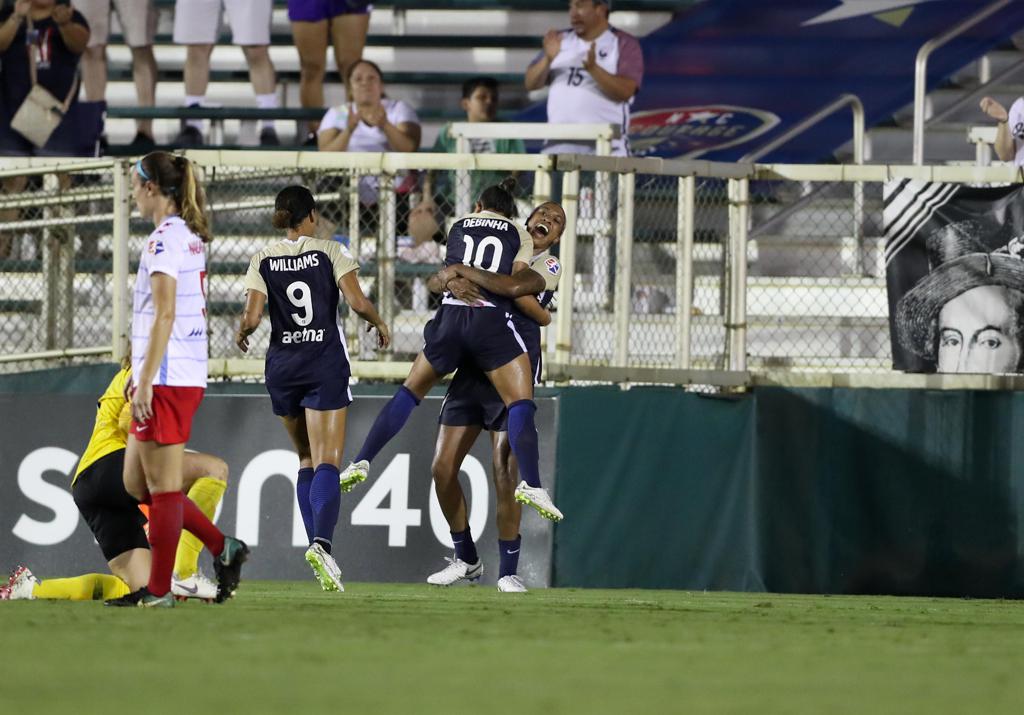 Cary, N.C. (July 4, 2018) – A lengthy weather delay only postponed another impressive performance from the North Carolina Courage, who won their third consecutive game 4-1 over the Chicago Red Stars Wednesday night at Sahlen’s Stadium at WakeMed Soccer Park on the Fourth of July.

With the win, the Courage improved to 12W-1L-3D, extending their lead atop the league table to 16 points over second-place Seattle.

“Delighted with the result. It’s nice to score some goals at home, too,” Courage head coach Paul Riley said. “We haven’t scored a ton of goals at home, and we created some great chances second half. The quality of football was good.”

After both teams had great chances to open the scoring in the opening minutes – Jessica McDonald and Williams each nearly converted early chances – Dunn put the Courage on the board with a moment of brilliance in the 20th minute.

With room to dribble, Dunn received a pass from McDonald and made a run toward the edge of the area before letting loose on a left-footed shot that Chicago goalkeeper Alyssa Naeher could do nothing about.

The goal was Dunn’s seventh of the season, which moves her into a tie with Portland’s Christine Sinclair for the league lead.

Thanks to Dunn’s strike, the Courage took a 1-0 lead into halftime, as goalkeeper Katelyn Rowland had little to worry about as the half progressed, after weathering the storm early on. Chicago’s Samantha Kerr hit the crossbar on a breakaway in the ninth minute, and Rowland made two saves in the first 10 minutes.

Out of the break, the Courage controlled much of the action and were eventually rewarded in the 67th minute when Williams perfectly curled a shot from the center of the 18-yard box into the upper right corner after receiving a low-to-the-ground cross from Merritt Mathias.

Just two minutes later, Debinha scored her second goal in as many games in the 69th minute, chipping Chicago’s Naeher after receiving a perfect through ball from Samantha Mewis, who entered the match less than two minutes beforehand.

The excitement continued as O’Reilly entered the match in the 75th minute to a rambunctious applause from the Courage faithful, and the Courage added a fourth goal in the 87th minute when Kristen Hamilton, on as a sub, scored her second goal of the season on an empty-netter following a cross from Williams, who maneuvered past Naeher after the Chicago goalkeeper ventured well off her line to try to gather a loose ball.

Three minutes into stoppage time, Chicago avoided the shutout with a penalty kick by Yuki Nagasato.

Williams’ impressive curler appeared to be a mental blow to Chicago, which had worked hard to try to equalize, but never could and looked defeated when the Courage doubled their advantage. Moments later, Debinha sounded the death knell to make it 3-0.

Sixteen games into the season, the Courage have amassed six more points in the standings (39) than they did through the same number of games into their NWSL Shield-winning 2017 campaign.

“It’s really special for me to be back. This is a special field for me: I won the national championship here in 2006 and played plenty of times besides that here on this field with the national team and UNC. Unbelievable win. This team is special, coach is special, the group is special.

When the North Carolina Courage announced they were going to have a team last season, it was right around when I was deciding to go to Arsenal. I knew that was an opportunity I couldn’t pass up, but I also knew in my heart that I would be back here. ” – Heather O’Reilly on making her team debut.

– Kickoff was delayed by nearly two hours because of rain and lightning. Originally scheduled for 7 p.m., the match began at 8:50.
– The win was the Courage’s first in regular-season action against Chicago since relocating to Cary in 2017.
– During the Courage’s current three-match winning streak, Dunn has scored three goals and recorded an assist.
– With their goals Wednesday night, Debinha and Lynn Williams each have five goals in 2018.
– Merritt Mathias has two goals and an assist during the Courage’s current winning streak.
–Jaelene Hinkle returned to the Courage’s starting lineup after missing the team’s game at Orlando on June 30 with a left quad strain.