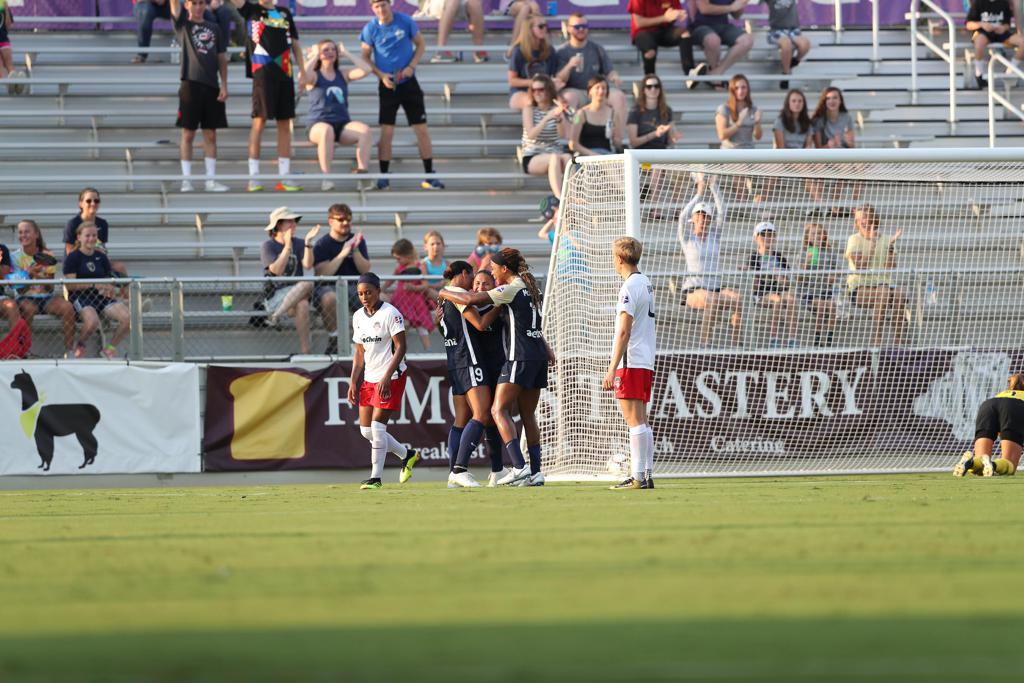 Midfielder Debinha and forward Jessica McDonald each scored in the victory, which extended the NWSL-leading Courage’s first-place lead to 16 points.

“It was a good professional performance,” Courage head coach Paul Riley said. “I wouldn’t say it was our best performance. It was also 95 (degrees) out there – it was hot, man. So that obviously hurt us a little bit, especially in the first half. We settled down a little bit when it got cooler in the second half. Yeah, I’m happy. The result is the result.”

The Courage (13W-1L-3D, 42 points) opened up the scoring in the 12th minute when Debinha netted her third goal in as many games.

The build-up to the goal began when midfielder McCall Zerboni spotted both Debinha and forward Lynn Williams making runs past Washington’s back line. Zerboni’s service was tracked down by Williams, who centered the ball, setting up an easy finish for Debinha.

The Courage controlled the possession and appeared momentarily to have doubled their advantage in the 30th minute when Williams headed her effort past Washington goalkeeper Aubrey Bledsoe, but she was ruled offsides.

With goalkeeper Katelyn Rowland hardly troubled – apart from a 10th minute strike from Washington right back Taylor Smith – the Courage took a 1-0 lead into the break.

In the 55th minute, it was Williams once again who nearly gave the Courage a two-goal lead. Able to deftly settle a long ball sent in from right back Merritt Mathias, Williams rounded Washington’s Bledsoe, and shot at an empty net from a tight angle, only to see the Spirit goalkeeper scramble back to the line and dive to save the shot.

Eventually, the Courage did find a second goal. Fed a pass at the edge of the area on the right from midfielder Crystal Dunn, forward Jessica McDonald cut inside and her left-footed strike took a deflection before finding the back of the net in the 60th minute.

From that point onward, the Courage never gave up control of the match and maneuvered comfortably to their seventh clean sheet of the season.

Up Next:
The Courage close out their regular-season series with Sky Blue FC in Piscataway, N.J., on Saturday, July 14 at 7 p.m. ET.

A stoppage-time goal by McDonald lifted the Courage to a 1-0 win over Sky Blue in March, and Dunn and Samantha Mewis each scored first-half goals in a 2-1 win in New Jersey in May.

Game Changer:
After going ahead 1-0, the Courage adding a second goal looked much more likely than the Spirit getting on the board. To their credit, however, the visitors were hard to break down defensively. But McDonald’s 60th-minute strike gave the Courage more breathing room, and a two-goal deficit was too much for Washington to overcome, especially against a Courage team that hasn’t surrendered multiple goals since May 23.

Key Stat:
With their victory, the Courage improved to a perfect 6W-0L-0D against the Spirit since relocating to Cary in 2017.

They Said It:
“We definitely have a target on our back – we are the team to beat. And at the end of the day, it is kind of nice to have that pressure and be able to act on the field in a professional manner the way that we have during this process. It’s pretty amazing to see us improve each game.” – Courage forward Jessica McDonald.

Notes:
– Heather O’Reilly started for the first time as a member of the Courage.

– With their goals against the Spirit, Debinha and Jessica McDonald both have six in 2018, tied for the fifth most in the NWSL.

– Crystal Dunn moved into a tie with Portland’s Christine Sinclair for the league lead in assists; both players have five in 2018.