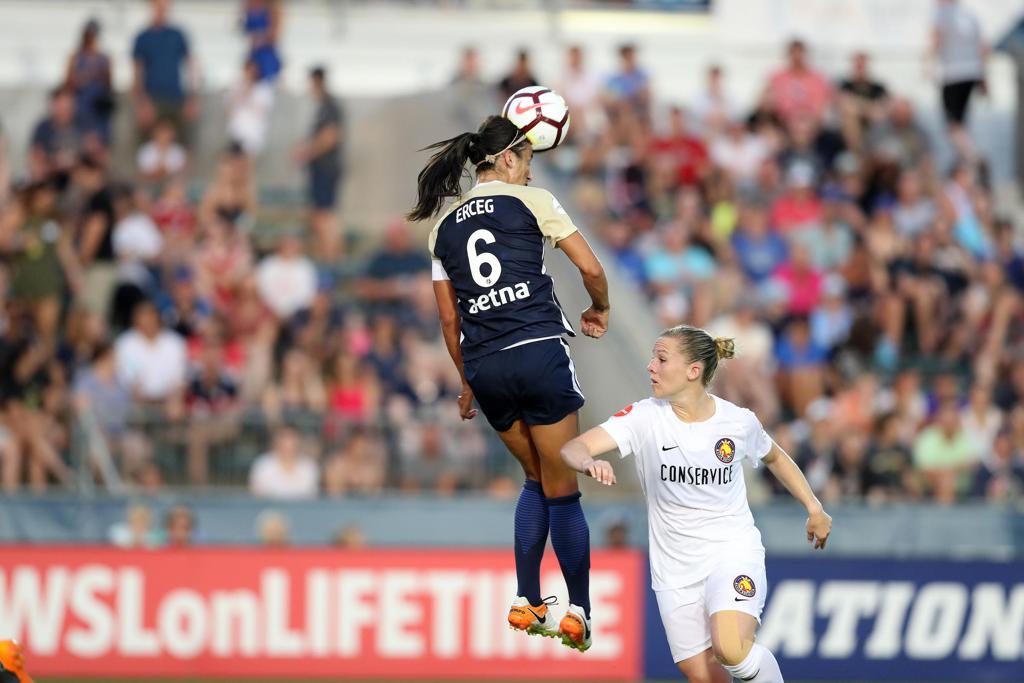 It’s easy to forget that North Carolina Courage center back Abby Erceg is only 28 years old when reflecting on all that she achieved in her storied international career.

Over the years, Erceg made a national-record 130 appearances for New Zealand, appeared at multiple Olympic Games and FIFA World Cups, and held the team’s captaincy from 2014-17. Those are just some of the accolades from Erceg’s 12-year journey with the Football Ferns, which began in 2006 at the age of 16 and recently concluded when Erceg retired from international competition for a second time in just over a year.

When she thinks back on her time with the New Zealand National Team, Erceg pauses for a second, needing time to process all that she accomplished and went through.

She starts in chronological order, remembering that first game day in November 2006 against a highly skilled China squad. Erceg was undoubtedly talented but green, too. She had yet to face opposition that talented.

“We got absolutely hammered,” she said. “But it was still special.”

So was the rest of Erceg’s time with New Zealand, and the results improved along the way, too.

New Zealand’s ascension up the ranks of the women’s game largely corresponded with Erceg’s time on the team.

In 2007, New Zealand appeared in the World Cup for the first time since 1991. Five years later, Erceg played a key role in helping her country reach the quarterfinals of the 2012 London Olympics, marking the first time New Zealand reached the knockout stage of a major competition.

“I think being a part of any sort of pinnacle event where we were kind of making history is something that’s going to stick out to me,” Erceg said, “not only for my career but for the rest of my life.”

Along the way, Erceg grew as a player, both tactically and as a leader. She currently captains the Courage, a responsibility she felt better prepared for because of her experience in the same role with New Zealand.

“It took a lot of work,” Erceg said about developing a leadership role. “I’m not someone who leads so much with my words. I’m more of an action person. I’m a little bit quieter on that side of things, so it takes a lot of work. I had to work a lot behind the scenes to make sure that I was doing the right things and making sure that I could provide the right role to different people.

“Obviously you’ve got people who enjoy different styles of captaining, so I had to make sure I could cater to that. It took a lot of work, but it was fun and I enjoyed it. It was challenging. I think it’s given me the skills to come into this environment and to do the same things here.”

The leadership, guidance and expertise Erceg brings to the Courage doesn’t go unnoticed, said Abby Dahlkemper, Erceg’s partner at the center of the team’s back four.

“I think she just brings this calming presence,” Dahlkemper said. “She’s confident, she’s poised. She just kind of settles us down. I think our relationship has evolved over the past three years now, and I think that we’re on the same page. I’m thankful that I’m continuing to learn from her, and I think she’s a great leader.”

In February 2017, Erceg retired from the New Zealand National Team, saying it was “time to move on to places where female footballers are appreciated, respected and endorsed,” and that she hoped New Zealand “one day has this philosophy.”

After progress was made behind the scenes on a collective bargaining agreement that would lead to equality between the women’s and men’s national teams in New Zealand, Erceg returned to the team for a pair of friendlies against Scotland in March, making one appearance. However, she soon realized it was best to retire from international soccer again.

“I wanted to do everything I promised I would,” Erceg said. “I said that if the environment got better I would look at coming back and playing more games. Unfortunately, with all that change, I just think that my energy is best served at the club level. I had a great career and a great time. A lot of great memories, but I think my time’s best served in America.”

Clearly, Erceg is delighted with her situation in Cary with the Courage. She’s still going full speed with her club career, one that has brought great satisfaction, especially since she joined head coach Paul Riley’s group in 2016.

Eighteen matches into the 2018 season, Erceg is the only Courage player to play every minute of every game, and she’s even been a threat in attacking positions, scoring twice (both on headers) and assisting once.

At times, Dahlkemper finds herself amazed at all that Erceg has accomplished – both at the international and club levels. It makes sense when she thinks about it, though.

“It’s remarkable, but at the same time I’m not surprised because I’m able to see her day in and day out,” Dahlkemper said. “I think determination comes to mind when I think of her, and I think that anything she puts her mind to she’s going to do. Not even do – but excel at.”