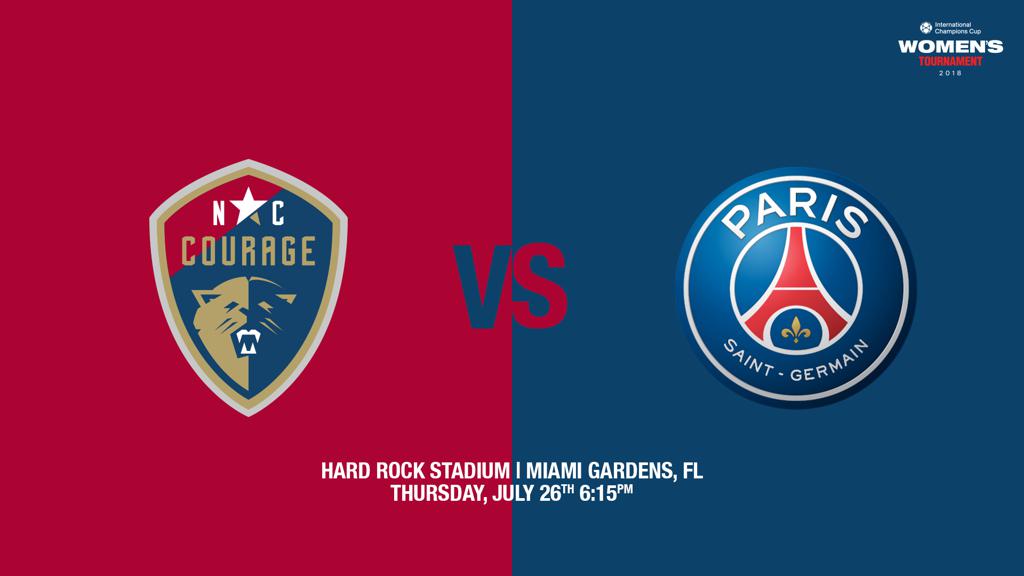 CARY, N.C. (July 25, 2018)– The North Carolina Courage will travel to Miami for two games against some of the best teams in the world in the inaugural Women’s International Champions Cup. The games will be played at Hard Rock Stadium, home of the Miami Dolphins. The opener for the Courage comes against Paris Saint-Germain on Thursday at 6 p.m., followed by the ICC final or third-place game on Sunday evening depending on the result against PSG.

Since its inception in 2013, the International Champions Cup has become known as the most high-profile summer tournament in the world. The NC Courage have been presented with a tremendous opportunity to compete in the ICC’s first-ever women’s bracket alongside Paris Saint-Germain, Manchester City, and Olympique Lyon.

The tournament is also an opportunity for players who have not previously seen regular time with the Courage. First-team regulars Abby Dahlkemper, Crystal Dunn, Merritt Mathias, Samantha Mewis, and McCall Zerboni were all named to the U.S. Women’s National Team’s 23-player roster for the 2018 Tournament of Nations. In addition, Debinha was called up for Brazil.

As a result, the Courage signed four players to national team replacement contracts. Defenders Carlin Hudson, Morgan Reid and Ryan Williams, as well as midfielder Sarah Teegarden will all be available for selection during the tournament. The roster will feature academy ties with NC Courage Academy defender Tori Hansen being selected to the first-team squad. Click here for the full squad list.

Paris Saint-Germain enters the tournament as the team begins their preseason ahead of the 2018-2019 Division 1 Feminine season. The team are fresh off a 18-2L-2D league record in 2017, a season in which PSG finished runners-up to fellow ICC opponent Lyon in both league play and the UEFA Champions League. PSG managed to come away with silverware in the club’s second Coupe de France Feminine title.

Meanwhile, the Courage will take a break from an NWSL season in which the team has clinched home-field advantage in the playoffs with five games left in the season.

Fact to Know:
The North Carolina Courage will make additional history during the inaugural Women’s International Champions Cup, as it will mark the first time an NWSL team has ever faced off with clubs from Europe.

Players to Watch
#18 Marie-Laure Delie
Delie has been a member of Paris Saint-Germain since the start of the 2013 season. The forward scored 10 goals in 21 appearances for the club last season. She has made over 100 appearances for the French National Team, while featuring in the 2011 and 2015 World Cups. Delie has averaged nearly a goal per game in her national team career.

#9 Lynn Williams
Williams has started in 15 of her 16 appearances for the Courage this season, scoring eight goals and adding four assists. The forward will be relied upon for her playmaking ability with the absence of many difference makers within the Courage lineup.