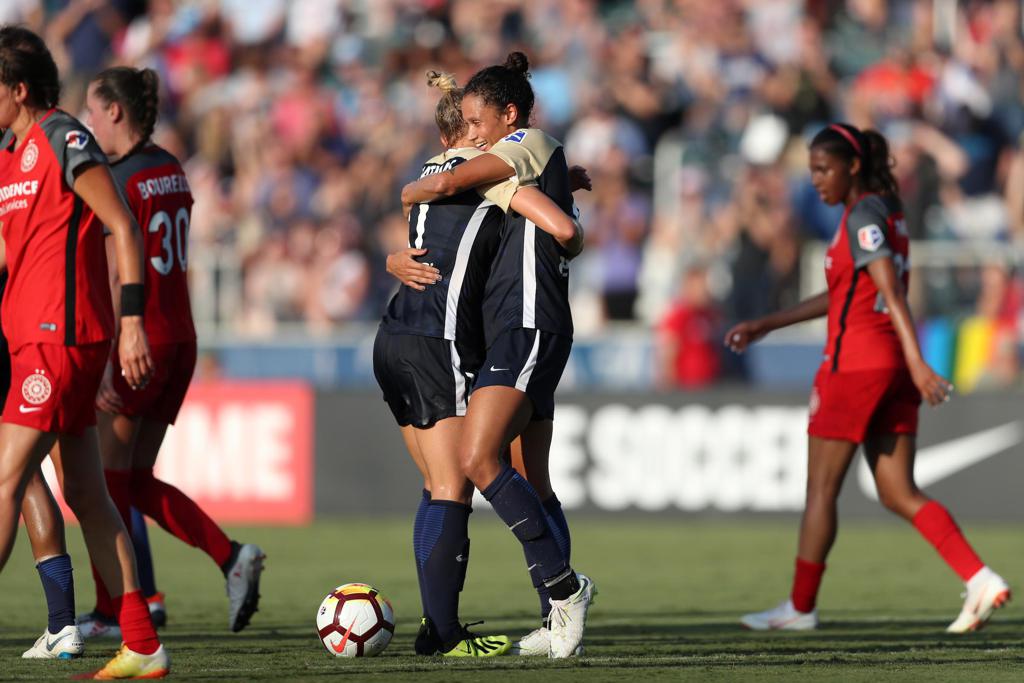 One week after beating Europe’s most successful club to claim the International Champions Cup, the North Carolina Courage marked their return home Sunday by winning the NWSL Shield for the second straight year with a 2-1 defeat of Portland Thorns FC at Sahlen’s Stadium at WakeMed Soccer Park.

The Courage (15W-1L-4D, 49 points), secured a first-place regular-season finish and swept the three-game regular-season series with Thorns FC with the win, as forward Lynn Williams powered North Carolina with a pair of first-half goals in an eight-minute span.

“I thought it was a really, really good performance,” Courage coach Paul Riley said. “Disappointed with the free kick; we talked about it the last 48 hours about stopping Horan on the free kicks, but we gave a silly one away. We should have cleared it and paid the price. But, great performance – I think worthy of winning the shield after that performance.

From the get-go, the Courage created the bulk of the game’s scoring chances, and forward Jessica McDonald was frequently involved in the attack.

In the 30th minute, McDonald appeared to have won a penalty when she crossed over Portland center back Emily Sonnett and was brought down. To the surprise of both McDonald and her teammates and coaches, no foul was called.

Eventually, the Courage’s persistence paid off in the 37th minute when Williams put away a precise cross from McDonald, who bended her pass out of reach from a trio of Portland defenders.

The build-up to the goal began with a perfectly-lofted ball from Debinha, positioned deep in the midfield, to McDonald, who recorded her fifth assist of the season.

Known for scoring multiple goals in quick succession, the Courage did just that and doubled their advantage right before halftime when Williams struck again in the 45th minute.

After right back Merritt Mathias played in a dangerous, low-to-the-ground cross from out wide on the right, a failed Portland clearance fell to Williams, who gladly made the most of the opportunity, finishing with her left foot.

Out of the break, Portland showed no intentions of going down without a fight and trimmed the deficit to one in the 49th minute when Tobin Heath’s free kick was met by Lindsey Horan, who headed home the Thorns' goal.

Even after Portland’s goal, however, North Carolina kept up the offensive pressure. In the 66th minute, a high-powered shot from midfielder Samantha Mewis was parried away by Portland goalkeeper Adrianna  Franch, and Williams, gunning for a hat-trick, gathered the rebound and cut inside but saw her shot rise above the crossbar.

In the 73rd minute, it was Debinha’s turn to threaten the Portland goal, and she did with a right-footed shot that curled to the right but was stopped by Franch.

Recharged with the insertions of forwards Crystal Dunn and Kristen Hamilton, the Courage continued to protect its one-goal lead while remaining active in the attack, and near the end of the five minutes of stoppage time, left back Jaelene Hinkle’s long-ball was tracked down by Williams, who fittingly secured the victory by dribbling the ball to the corner, killing off the game’s final seconds.

Up Next:
It’s a quick turnaround for the Courage, who now turn their attention to a road match against the Chicago Red Stars on Friday, August 10 at 8 p.m. ET. North Carolina drew 1-1 against Chicago in May, and won 4-1 against the Red Stars on the Fourth of July.

Game Changer:
Despite Portland’s quick response at the beginning of the second half, North Carolina remained collectively calm and composed, and didn’t abandon its usual style of play. Instead, the Courage vigilantly pushed for more goals, and even though they didn’t get one, the offensive pressure meant great chances were few and far apart for Portland.

Key Stat:
With her two goals, Williams moved into a tie with Portland’s Horan for the league lead. Both players have 10 goals on the year.

They Said It:
“It’s great. I think it shows that all of our hard work in the regular season has paid off. But we’re staying hungry. We want to continue out the season and continue building and see how far we can go with this thing. It’s a great feeling. I think we’ll go back tonight and have a little celebration of just like, ‘We’ve done this,’ but the season’s not over.” – Lynn Williams on the Courage capturing their second consecutive NWSL Shield.

Notes:
– The Courage are the second team in NWSL history to repeat as shield winners; Seattle achieved the feat in 2013 and ‘14.

– The Courage outshot Thorns FC 31-9, and registered 10 shots on target to Portland’s two.

– Samantha Mewis made her first start for the Courage since June 16.

– With the win, North Carolina swept the three-game regular-season series against the Thorns, and improved to 4W-2L-0D against Portland since relocating to Cary in 2017.