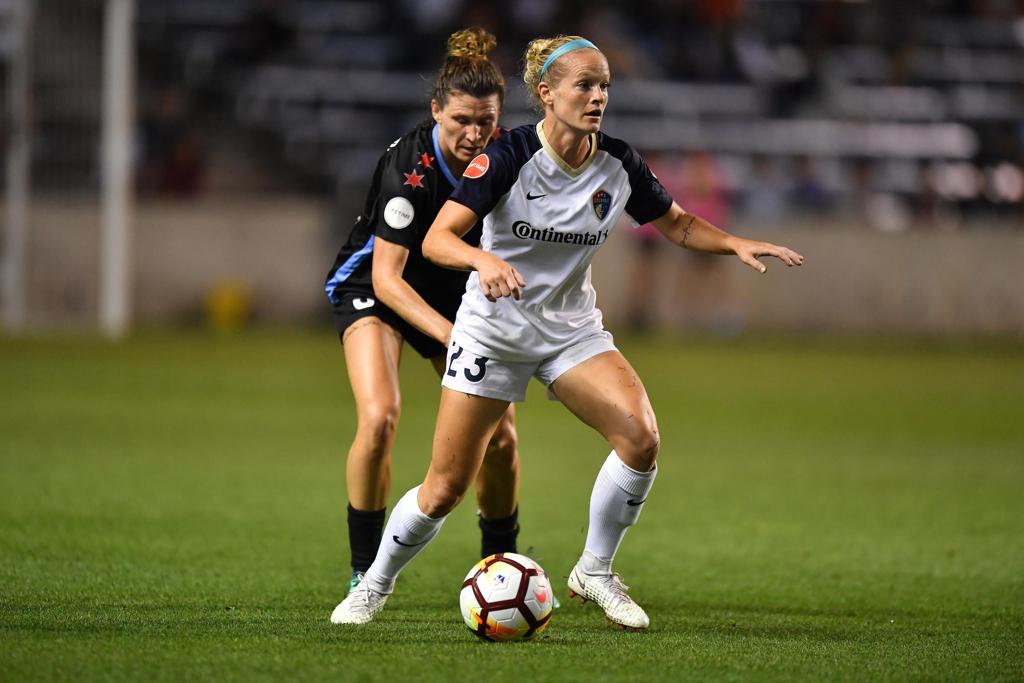 With the result, the Courage (15W-1L-5D, 50 points) need just five more points in their three remaining regular-season matches to set the NWSL record for points in a season, and are one victory away from tying the league record for regular-season wins for the second year in a row.

The Red Stars threatened to take an early lead on Friday night, but Katelyn Rowland managed to deflect a goal-bound ball from Chicago’s Danielle Colaprico, who nearly scored directly from a corner kick.

Four minutes later, Courage midfielder Debinha returned the favor, nearly scoring via a corner kick, but Rowland’s counterpart, Alyssa Naeher, leaped to deny the Brazilian what would have been an improbable goal.

In the 21st minute, however, Debinha would not be denied. The beneficiary of a lofted, on-target cross from forward Jessica McDonald out on the right flank, the Brazilian came crashing in and headed home her seventh goal of 2018, as her effort bounced off the grass once before hitting the roof of the net.

As the first half progressed, the Courage continued to create chances. In the 30th minute, the ever-dangerous Crystal Dunn let loose a pace-filled shot with her left foot just outside of the 18-yard-box, but watched it travel just wide right of net.

Right before the halftime whistle, McDonald nearly doubled the Courage’s advantage after receiving a pass from Dunn out on the right side of the box, but her effort at goal had a bit too much power on it.

Out of the break, Chicago enjoyed an extended stretch of possession in the Courage half, and Morgan Brian hit the post in the 60th minute.

Four minutes later, Chicago’s Sam Kerr equalized for the home side, heading in a curling cross from Vanessa DiBernardo.

There was nearly an instant response from the Courage, as a free kick in the 67th minute from Debinha from about 22 yards out rose just high.

Constantly involved in the action, Debinha nearly made Chicago pay for a botched clearance in the 79th minute, but she struggled to get much power on her shot, which was gathered comfortably by Naeher.

One last chance came about for the Courage, two minutes into stoppage time, when left back Jaelene Hinkle sent in a threatening cross that second-half substitute Kristen Hamilton nearly connected with.

From that point on, the Courage defense tightened up in the game’s closing minutes and prevented Chicago from stealing a win, as the two sides played to a draw for the second time this season.

Up Next:
The Courage return to Sahlen’s Stadium at WakeMed Soccer Park to face the Orlando Pride on Saturday, August 18 at 7 p.m. ET in their the second-to-last home match of the regular season.

Game Changer:
The Courage had multiple opportunities to recapture the lead in the second half, but Debinha’s near-goal in the 79th minute stands out. Just a few yards out from goal, the Brazil international couldn’t quite get the right amount of power needed on her shot, but still came tantalizingly close to restoring the lead for North Carolina.

Key Stat:
The Courage  is undefeated in road matches (8W-0L-3D), and has scored 29 goals on the road, 15 more than any other team in the NWSL.

Notes:
– The Courage can tie the NWSL record for regular-season wins with a victory in any of their three remaining regular-season matches against the Orlando Pride, Seattle Reign FC and Houston Dash.

– The Courage (50 points) need five more points to break the league record for points in a regular season, a mark set by Seattle Reign FC in 2014 (54 points).

– Through 21 matches, the Courage have scored 44 goals. With three regular-season games remaining, North Carolina needs to score seven more times to break the league record, which was set in 2014 by Seattle Reign FC (50 goals).

– With her first-half goal, Debinha moved into a tie for the fourth-most in the NWSL.

– Jessica McDonald’s first-half assist on Debinha’s goal moved her into a tie for the league lead with Portland’s Christine Sinclair. Both players have seven assists.

– The NC Courage are on an eight-match unbeaten streak.