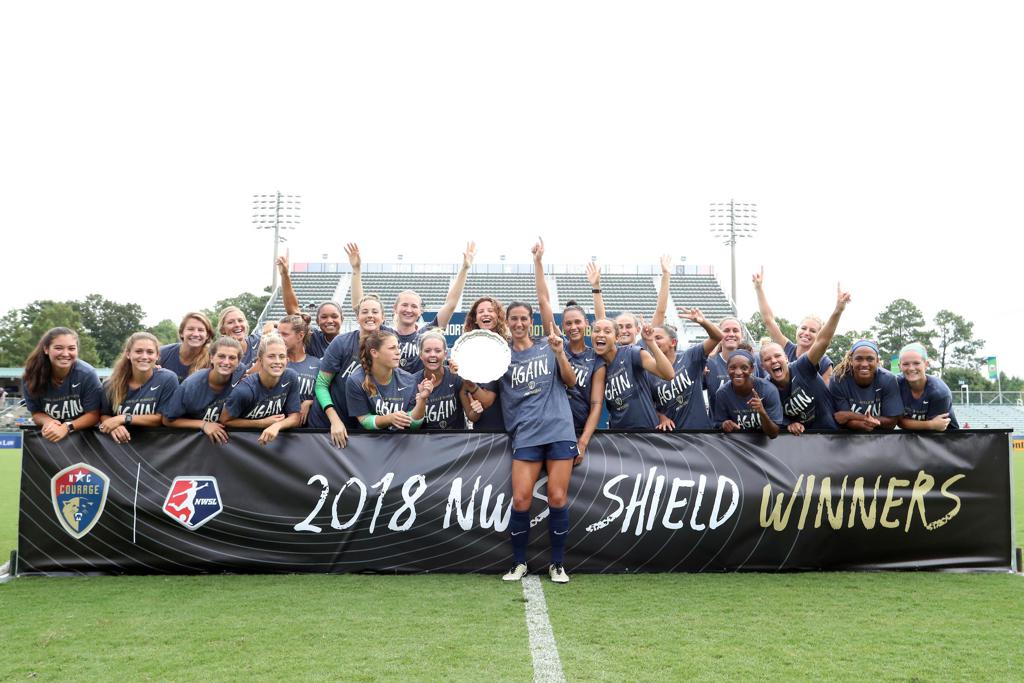 CARY, N.C. (August 19, 2018) – In a match that started Saturday night, was suspended because of dangerous weather, and eventually resumed Sunday morning, the North Carolina Courage defeated the Orlando Pride 3-0 at Sahlen’s Stadium at WakeMed Soccer Park. The Courage hosted a regular-season team record of 7,606 fans.

Forward Lynn Williams’ one-goal, one-assist performance powered North Carolina, which in a test of its ability to adjust to unusual circumstances improved to 16W-1L-5D (53 points), tying the U.S. professional women’s soccer record for regular-season victories for a second straight season.

Two regular-season games remain for the Courage, who are are two points away from setting the NWSL regular-season points record (55) and four goals away from becoming the highest-scoring team in league history.

Following the conclusion of the match, the Courage were honored for winning the NWSL Shield by the league’s managing director, Amanda Duffy, who visited Cary for a second consecutive season to recognize the league’s best regular-season team.

“I thought we controlled the game as soon as the whistle went this morning, the 70 minutes we had control of the game,” Courage coach Paul Riley said. “I just hoped we were going to get a goal. We missed quite a few chances. I think we limited them to really (just) set pieces, where they looked dangerous. So yeah, very pleased.”

With the score at 0-0 in the 22nd minute, the match was suspended Saturday night because of unsafe weather conditions.

Just over 13 hours later, the two teams picked up where they left off. The Courage’s best scoring chance of the first half came in the 44th minute. With open space in transition, Williams released a powerful shot from beyond the 18-yard box that continued to rise as it approached Ashlyn Harris, forcing the Orlando goalkeeper into a save.

Soon after, halftime arrived with nothing separating North Carolina and Orlando.

In the 55th minute, the Courage appeared to take the lead when midfielder Debinha finished from just beyond the mouth of the goal, but the goal was disallowed, as forward Jessica McDonald was ruled offsides in the build-up.

Williams, out of nothing, once again caused problems for Orlando’s defense in the 60th minute, as she let loose on a strike that an outreached Harris could not reach. Unfortunately for Williams, her shot rose just above the crossbar.

Not long after, Courage midfielder Samantha Mewis’ header in the 70th minute off a Debinha free kick rolled just wide off the left post after Orlando’s Harris got a piece of it.

Eventually, North Carolina’s persistence paid off and was rewarded in the 75th minute on an own goal by Orlando defender Shelina Zadorsky. Despite not earning the goal herself, the score was made possible by Williams, who drove to the endline on the right flank before playing in a dangerous cross that deflected off both Zadorsky and Harris before finding the back of the net.

Known for its propensity for scoring multiple goals in quick succession, North Carolina doubled its advantage just six minutes later, in the 81st minute, when Debinha roofed her shot from the left side of the box, after Williams won possession away from Orlando’s Ali Krieger on the endline.

At last, Williams got on the scoresheet herself in the 88th minute, as she headed home a cross from right back Merritt Mathias for her 11th goal of the season.

Up Next:
Riley’s team now turns its attention to its final road match of the regular season. North Carolina travels to the Pacific Northwest to take on Seattle Reign FC on Saturday, Aug. 25 at 4 p.m. ET. With a win, the Courage would complete a three-game, regular-season sweep of Seattle.

A goal from McDonald powered the Courage to a 1-0 home win against Seattle in April, and Crystal Dunn’s brace lifted North Carolina to a 4-1 victory in Seattle in June.

Game Changer:
Williams’ hard work led to the Courage’s first goal, but her determination on Debinha’s score was especially commendable. Krieger attempted to box out Williams, desperate to let the ball cross the endline for an Orlando goal kick. Somehow, Williams contorted her body around Krieger and poked the ball to Debinha, who rewarded Williams for her hard work with a goal, one that made Orlando’s comeback attempt much more difficult.

Key Stat:
The Courage have scored multiple goals within a 10-minute span in eight different matches in 2018.

They Said It:
“They started to have to open up the game, and I think when you give us a little bit of space and we got one goal, our momentum starts to go and go and go. I think it’s hard to stop us.” – Lynn Williams on the Courage’s propensity for scoring multiple goals in quick succession.

Notes:
– With the win, North Carolina for a second consecutive season tied the U.S. professional women’s soccer record for most regular-season wins (16). The Courage can set a new record with a victory in its next match against Seattle Reign FC on Saturday, Aug. 25, or against the Houston Dash in the regular-season finale on Sept. 8.

– North Carolina, which has 53 points this season, is two away from setting the NWSL regular-season points record (55). The current record (54 points) was set by Seattle Reign FC in 2014.

– After scoring three goals against Orlando, the Courage have 47 on the season and are four goals away from setting the NWSL regular-season record. The current record (50 goals) was set by Seattle Reign FC in 2014.

– Lynn Williams scored her 11th goal of the season on Sunday, moving her into a tie with Lindsey Horan of Portland Thorns FC for the second-most in the league.

– Debinha scored her eighth goal of the season on Sunday, and is now tied for the fifth-most goals in the NWSL.

– Goalkeeper Katelyn Rowland recorded her sixth clean sheet of the season. As a team, the Courage have recorded 10 shutouts in 2018.