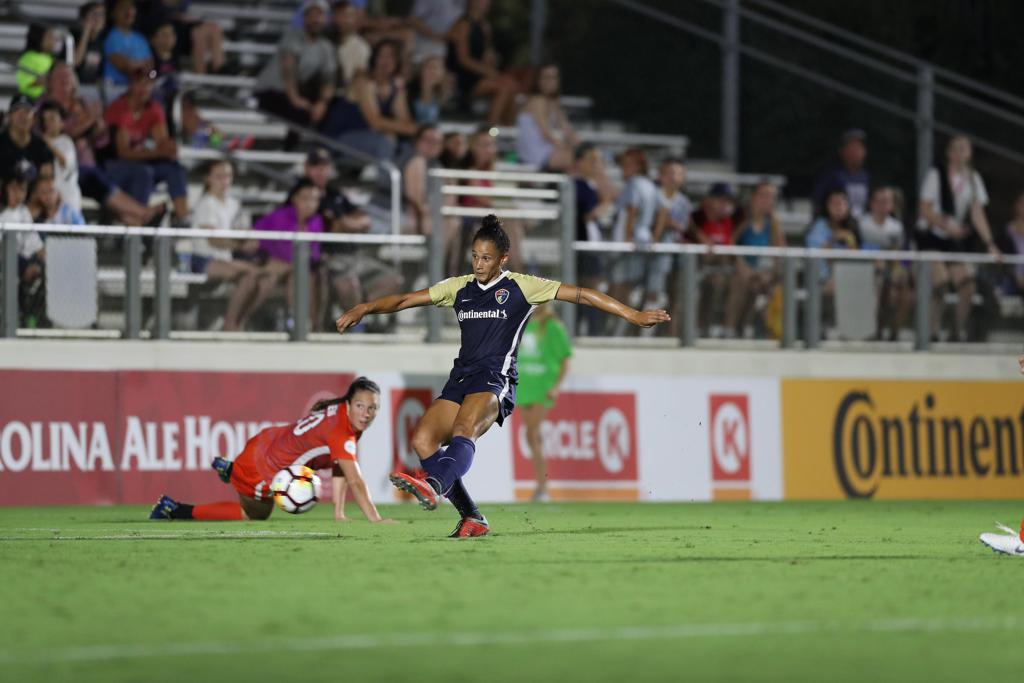 CARY, N.C. (September 8, 2018) – The North Carolina Courage ended the NWSL regular season in style, breaking multiple records in its 5-0 win over the Houston Dash in the second game of Saturday’s historic doubleheader at Sahlen’s Stadium at WakeMed Soccer Park.

Fittingly, it was Lynn Williams, the Courage’s top goal-scorer in 2018, who’s 13th goal of the season in the 43rd minute gave North Carolina the league’s scoring record, as the Courage moved beyond Seattle Reign FC’s 2014 squad mark of 50 goals, the previous high. The same Seattle team also previously held the league records for regular-season wins (16) and points (54).

In addition to the on-field records, the Courage also set a club record for attendance. Over 9,505 spectators turned out for Saturday’s doubleheader, which began with a 3-3 draw between North Carolina FC and Nashville SC.

The postseason now awaits the most successful regular-season team in NWSL history.

“I thought it was a really professional performance,” Courage head coach Paul Riley said. “Difficult game for us. But the players again, the players that have come back – that have been away – have been professional in their approach the last 48 hours. Hats off to them. They set a big mark, I think, for the league in the future in a lot of different ways. I just said to them it’s not an easy thing to do, to do what they’ve done this season.”

In the ninth minute, Houston looked poised to take an early lead, as Sofia Huerta found herself in on goal until Courage center back Abby Erceg intervened with a crucial tackle.

Four minutes later, it was Erceg who assisted on the game’s opening a goal, a 13th minute score from forward Jessica McDonald.

After taking on a defender one-on-one, McDonald approached Houston goalkeeper Jane Campbell and deftly slotted her shot past her from a tight angle with her right foot.

The Courage continued to be unrelenting in the attacking third, doubling the advantage in the 26th minute, as midfielder Crystal Dunn made sure her team wouldn’t be denied by the woodwork. After Williams saw her curling effort bounce off the right post, Dunn gathered the rebound but hit the left post herself.

With the third time being the charm, Dunn tracked down another rebound before roofing her shot into the net for her eighth goal of the season.

With halftime approaching, Williams redeemed her early miss and put the Courage ahead 3-0 in the 43rd minute. Played in by a through ball from McDonald, Williams provided the record-breaking goal for North Carolina.

In the 66th minute, forward Kristen Hamilton came on as a substitute, and it didn’t take long for her to make an impact. Four minutes after entering the game, Hamilton scored her third goal of the season in the 70th minute, a rocket of a shot from a tight angle on the right side of the 18-yard box.

From there, North Carolina saw out the result and closed the books on a successful regular season.

Up Next:
The Courage host the Chicago Red Stars in the semifinals of the NWSL Playoffs for the second time in as many years on Sunday, Sept. 16 at 3 p.m. ET. The Courage went 1W-0L-2D in the regular season against the Red Stars.

North Carolina defeated Chicago 1-0 in October behind a late game-winner from midfielder Denise O’Sullivan to secure its spot in the 2017 NWSL Championship.

Game Changer:
McDonald’s early goal set the tone for a dominant performance by the Courage.

They Said It:
“That shows you how phenomenal of a team we have – how amazing our culture is at the end of the day, how hard we’re willing to work for each other. All the hard work we’ve truly put into this season, we’ve deserved it..” – Courage forward Jessica McDonald on the Courage breaking numerous NWSL records.

Notes:
– With her two assists, Courage forward Jessica McDonald finished as the league assist-leader with eight on the season.

– Courage forward Lynn Williams’ two goals Saturday night gave her 14 on the season, the second most in the NWSL. Only Sam Kerr of the Chicago Red Stars (16) scored more.

– The Courage are the only team in the NWSL to have three players with at least eight goals. Lynn Williams had 14 goals, while Debinha and Crystal Dunn scored eight.

– Forward Kristen Hamilton and midfielders Meredith Speck and Heather O’Reilly appeared as second-half substitute. Hamilton’s 70th-minute tally was her fourth of the season.

– The Courage finished their home regular season with a 9W-1L-2D record at Sahlen’s Stadium at WakeMed Soccer Park.