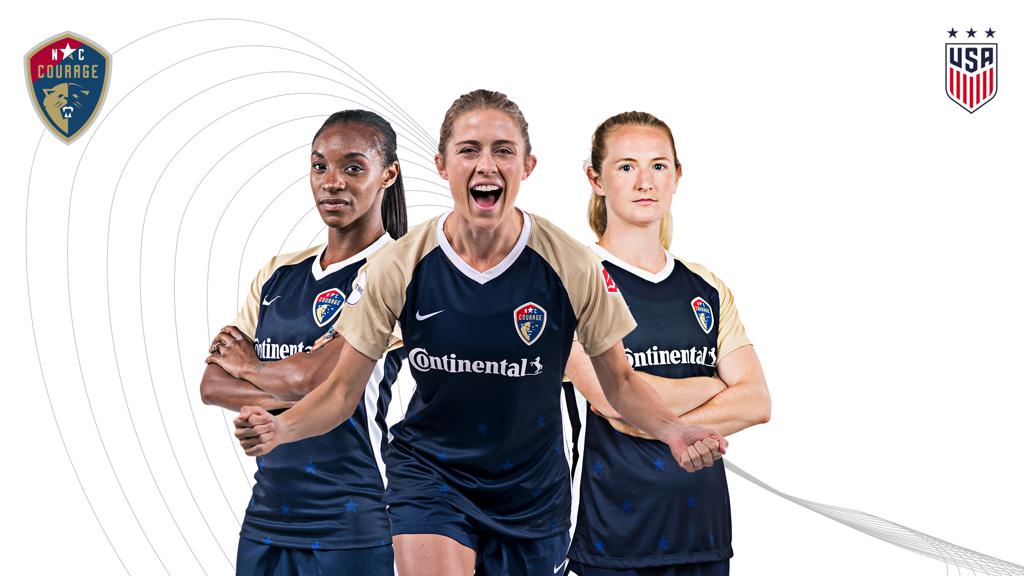 CHICAGO (Sept. 19, 2018)– Abby Dahlkemper, Crystal Dunn and Samantha Mewis have all been called up to the U.S. Women’s National Team as head coach Jill Ellis has named 20 players to the roster for the 2018 Concacaf Women’s Championship that will be contested from Oct. 4-17 at three venues across the United States, including Sahlen’s Stadium at WakeMed Soccer Park, where the USWNT will play its group stage Oct. 4-10. Ten of the players named were on the squad that competed in the 2014 Concacaf Women’s Championship.

The 2018 Concacaf Women’s Championship features eight countries divided into two groups of four with each group’s top two finishers advancing from round-robin play to the semifinals. The two finalists and the winner of the third-place match will qualify directly to the 2019 FIFA Women’s World Cup in France. The fourth-place finisher will earn a spot in a two-game playoff against Argentina, which finished third in South American qualifying, for a final berth to the tournament.

“We feel really good about the process that has gotten us to this point, and the final selection of this group,” said Ellis. “We’ve had a couple of injuries recently, but the depth of our pool is excellent, and I have confidence that each of the 20 players will perform at their highest level when called upon in these games. Our group is prepared and highly motivated to earn the right to be a part of France 2019.”

The USA opens its qualifying tournament on Oct. 4 against Mexico (7:30 p.m. ET), faces Panama on Oct. 7 (5 p.m. ET) and then finishes the first round against T&T on Oct. 11 (7:30 p.m. ET). All the USA’s Group A matches will be played in Cary, N.C. at Sahlen’s Stadium at WakeMed Soccer Park, home of the NWSL regular season champion North Carolina Courage.

FOX Sports, the home of the 2019 FIFA Womenâ€™s World Cup, will show 2018 Concacaf Womenâ€™s Championship across the FOX Sports family of networks. For viewers on the go, matches can be streamed live via FOXSports.com and the FOX Sports app.

The other players who were on the team for the 2014 qualifying tournament are: Morgan Brian, Julie Ertz, Ashlyn Harris, Tobin Heath, Kelley O’Hara and Christen Press. Crystal Dunn, who was named to the roster for the 2014 tournament before an injury ruled her out, will be playing in her first World Cup qualifying competition at the senior level. On that 2014 roster, Dunn was replaced by Julie Johnston, now Ertz, but she did not see action in the tournament.

The group of defenders is an excellent mix of young and experienced players. Sauerbrunn, the three-time NWSL Defender of the Year, and O’Hara are both capped more than 100 times. Dunn has 69 caps and has play in 12 of the USA’s 13 games this year at left back while starting nine of those matches. Abby Dahlkemper, the 2017 NWSL Defender of the Year, along with Emily Sonnett and Casey Short, have been three of the top defenders in the NWSL over the past few seasons. UCLA senior Hailie Mace is the only collegiate player on the roster but has earned two caps already.

The midfield is also an experienced group even though just one player – Brian – played in the last qualifying tournament. Ertz has 66 caps to go along with her 16 goals, and Brian has 79 caps. Lindsey Horan, who had an MVP-caliber NWSL season, has 56 caps, and Samantha Mewis has 38 caps and seven goals. Rose Lavelle has 13 caps to go with her three goals.

The U.S. forwards are a formidable group, having combined for 28 of the USA’s 37 goals this year. All six of the forwards have played in a world championship, and five of them have played in multiple world championships. Lloyd leads the USA with 14 games played in World Cup qualifying and is the leading scorer with seven goals. Megan Rapinoe has ten World Cup qualifying caps with three goals while Alex Morgan has seven with two goals.