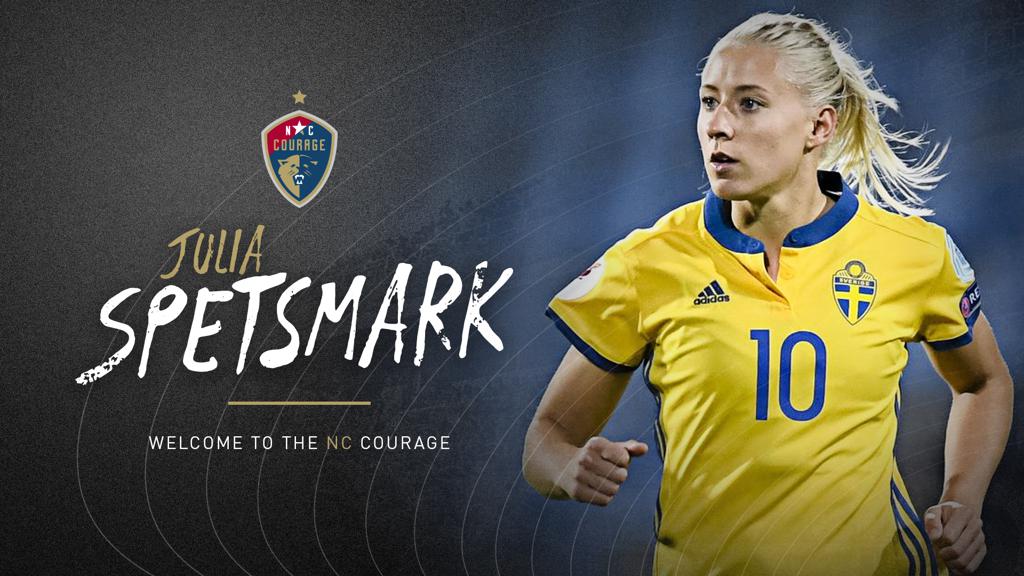 CARY, N.C. (January 7, 2019) – The North Carolina Courage announced today they have acquired Swedish international midfielder Julia Spetsmark pending receipt of her International Transfer Certificate and P1 visa. Per club policy, no further details of the transaction were disclosed. With the addition of Spetsmark, the defending NWSL Champions look to build on the already strong midfield as they prepare to defend their 2018 title.

“Julia fits our profile for an attacking player. Skillful, pacey, excellent 1-on-1 ability, crafty and relentless both sides of the ball,” said NC Courage Coach Paul Riley.  “It’s a tremendous opportunity for Julia and we believe this will be key in her establishing herself as an invaluable piece on the Swedish National team. Excited to add her to all the other key attacking pieces we have.”

Spetsmark started playing in the Damallsvenskan, the highest division of women’s soccer in Sweden, for Mallbackens IF at age 17 and has made over 100 appearances in the league since 2006.

The Swedish player has had stints with many teams over the years including QBIK and Sunnana. She played four seasons with KIF Orebro from 2014-2017. Spetsmark scored 12 goals in the four-year span, six of which came in 2017.

She took a short break from the Swedish league to play for Manchester City Women in the FA WSL where she played three games with the team.

Spetsmark most recently played for the Swedish team Djurgården, in the Damallsvenskan. After signing with the team in July 2018, she made 11 appearances and scored six goals.

Spetsmark made her National team debut in 2005 with Sweeden’s U-17 Team. She earned her first senior cap in 2016. She has been called up to the Swedish National team for friendlies and tournaments, including for the UEFA Women’s Euro 2017 roster where she made one appearance.

The NC Courage now turn their attention to the 2019 NWSL College Draft which will take place in Chicago on Thursday, January 10 at 12 Noon ET. The Courage hold four draft picks and will select fifth, ninth, 14th and 36th.

The NWSL College Draft will be streamed live at:
Facebook.com/NWSL, YouTube.com/NWSL and NWSLsoccer.com/CollegeDraft,  as well as on the NWSL App (iTunes App Store | Google Play).