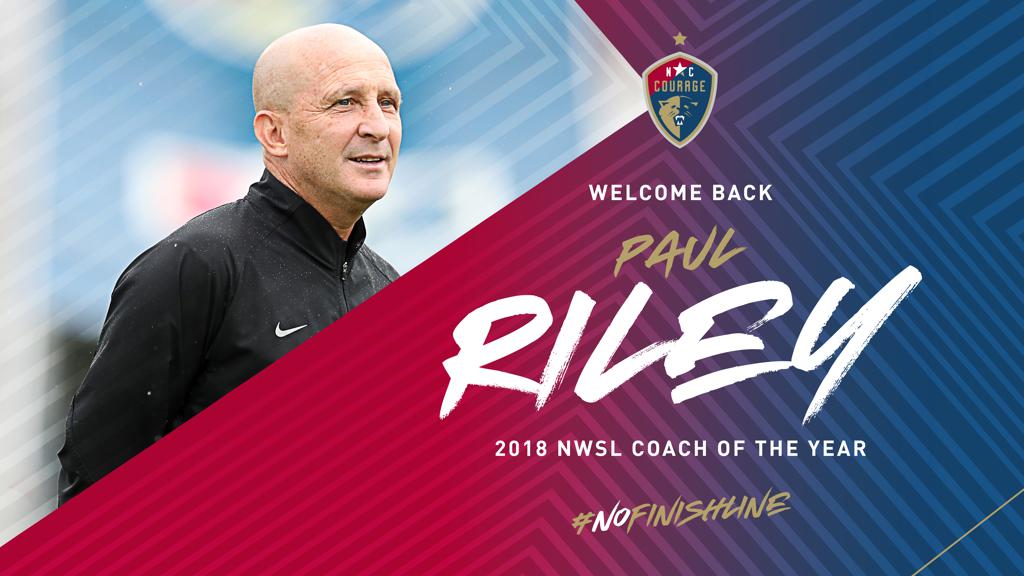 Cary, N.C. (January 14, 2019)- The North Carolina Courage announced today that it has inked two-time NWSL Coach of the Year Paul Riley to a multi-year contract. Riley returns to the Courage after completing a historic treble, guiding the team to the inaugural Women’s International Champions Cup, a second consecutive NWSL Shield and the 2018 NWSL Championship. Additionally, the club has announced that VP of Operations Bobby Hammond will also assume the title of Assistant General Manager for the NC Courage. Per club policy no further details were disclosed.

“We are thrilled to have Paul continue to guide the team,” said North Carolina Football Club President and GM Curt Johnson. “Paul is a consummate professional who has built a strong, winning culture within the Courage. We look forward to having him lead the team with continued success for years to come.”

Riley joined the NC Courage during the team’s transition from Western New York and led the Courage to a 16-win season to clinch the 2017 NWSL Shield. Riley and the Courage followed their inaugural season with a record-breaking 2018 that saw the team only
lose one match posting a 17-6-1 record on its way to the 2018 title.

“Tremendous honor to be back at this club,” said Riley. “Steve Malik is a visionary who completely understands the fantastic growth in the women’s game. Courage country is a special place. We have an amazing group of talented players who are willing to walk the wire in the clouds. They have given me the Courage to follow them. It’s an exhilarating time at the club and our fanbase is second to none. I’m looking forward to the challenge of a World Cup year and we have a motivated staff who will strain every sinew they have to service the team and make the club successful.”

The success of the team led to Riley being voted NWSL Coach of the Year in 2018; an award he received in 2017 as well.

In his first year with the Western New York Flash (now North Carolina Courage), Riley led the team to the 2016 NWSL Championship where they defeated the Washington Spirit 3-2 in penalty kicks to raise the trophy. Before coaching the Flash, he was the head coach of the Portland Thorns of the NWSL in 2014 and 2015.