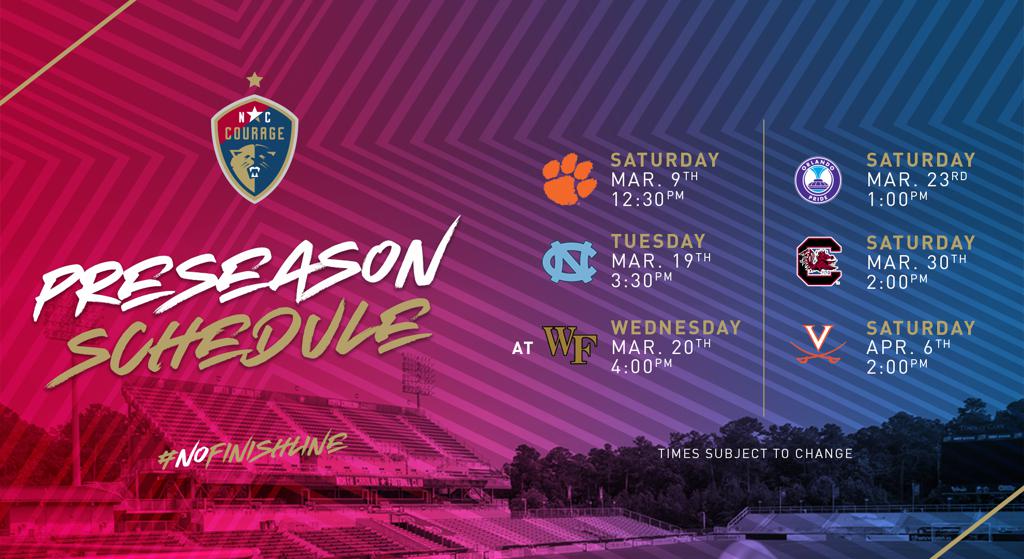 CARY, N.C. (February 22, 2019) – The North Carolina Courage has released its 2019 preseason schedule. The team will play six matches in March and April to prepare for defense of their 2018 NWSL Championship, including a marquee matchup against the Orlando Pride on March 23 at 1:00 p.m. as part of the club’s Friendship Cup.

The preseason schedule opens with a match against Clemson University on Saturday, March 9 at 12:30 p.m. on Field 7 at WakeMed Soccer Park. This game will precede the NCFC home opener against Louisville which will take place at 4:00 p.m. the same day.

Next on the preseason schedule, the NC Courage will take on college soccer powerhouse UNC on Tuesday, March 19 at 3:30 p.m.

The team will then travel to its only away preseason match to play Wake Forest University on Wednesday, March 20at 4:00 p.m.

On Saturday, March 23, the Courage will match up against the Orlando Pride at 1:00 pm as part of a doubleheader with NCFC who will take on Mexican club, Necaxa at 3:30 p.m. Both matches will take place at Sahlen’s Stadium at WakeMed Soccer Park. The Courage came away with three wins against the Pride during the 2018 regular season. The preseason game will feature USWNT stars McCall Zerboni, Sam Mewis, Crystal Dunn, Jessica McDonald, and Abby Dahlkemper on the NC Courage side, and Alex Morgan and Ashlyn Harris on the Orlando Pride side.

Preseason matches will be free with the exception of the doubleheader on March 23. Fans are encouraged to attend all games. All preseason games, times, and locations are subject to change. Please check nccourage.com for updates.

Tickets for the March 23 games can be purchased by buying a “Friendship Ticket Pack,” which gives buyers three (3) games for one low price.  Friendship Pack buyers will receive a ticket to both doubleheader games (Courage-Orlando game and NCFC-Necaxa game) plus the choice of either the NCFC home opener on March 9 or the Courage home opener on April 13. Prices for the Friendship Pack start as low as $30.