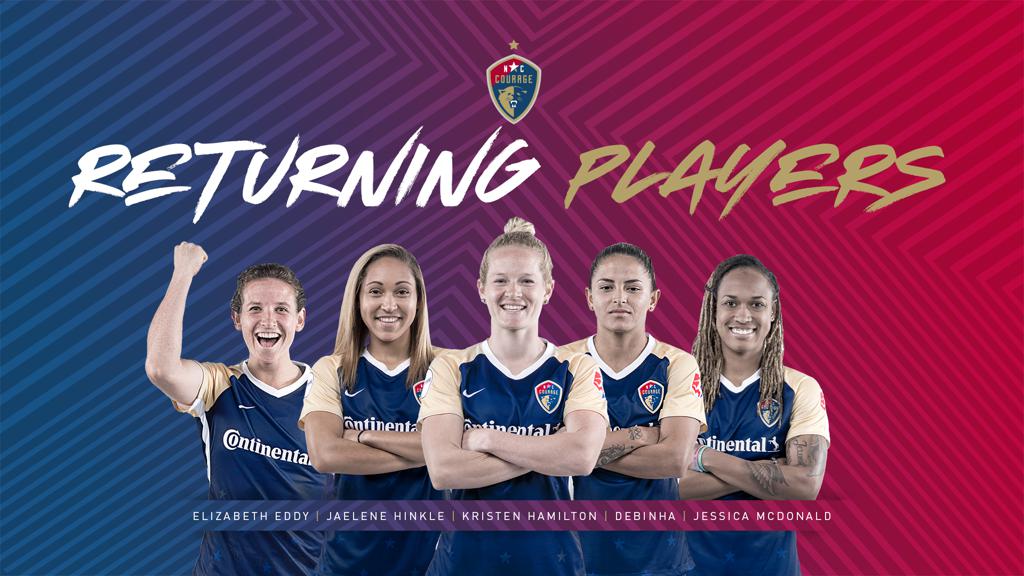 CARY, NC (February 25, 2019) – The North Carolina Courage announced today that agreements were reached on contracts with Jessica McDonald, Kristen Hamilton, Jaelene Hinkle, Elizabeth Eddy and Debinha. Per club policy, no further details of the transactions were disclosed. All five players joined the NC Courage when the team was relocated to Cary in 2017 and have been instrumental in the team’s success since that time.

As the reigning NWSL Championship MVP, McDonald looks to build on last season’s success. In the past two seasons, McDonald has made 46 appearances for nearly 3,000 minutes. In 2018 she scored 10 goals, two of which came in the NWSL Championship game, and three of which were game-winners. McDonald recently spent time training with the United States Women’s National Team in Europe where she saw her fourth and fifth caps with the senior team. She has also been named to the USWNT roster for the SheBelieves Cup.

“Jess is a true warrior and has provided the club with some tremendous moments the last few years,” said NC Courage head coach Paul Riley. “She knows how to prepare herself and has matured into a much better footballer over recent seasons. Now getting the chance with the USWNT is terrific for her and she thoroughly deserves the opportunity. Size, power, intelligence, and a ton of other great tools have made her one of the premier forwards in the NWSL.”

Riley is excited to have Hamilton back for another season. “Kristen has a big year ahead of her. She understands every aspect of our system and is another player who has developed substantially. Her skill, speed and fabulous ability to run behind back lines makes her a handful for opposing defenses. Great to get such a talented player under contract and my gut is she will be electric this year. Players must love the process of doing their best and she embraces the journey of getting better”

A key component of the NC Courage defense returns with the re-signing of Jaelene Hinkle. Hinkle has started 22 games in both seasons with the team, totaling 3,912 minutes. She has played a vital role in feeding the ball to her teammates with seven assists since 2017.

“Jae is the best left back in the country and continues to develop many aspects of her game,” said Riley. “She has speed, skill, and is a major attacking threat for our team. She has worked hard to improve her defensive acumen and we believe she has the potential to be the best, most equipped left back in the world. Excited to see her progress.”

Eddy, another member of the NWSL championship winning team, will also rejoin the NC Courage in 2019. The midfielder has seen action in seven matches over the past two seasons. She was a member of the 2016 Western New York Flash team that also won an NWSL Championship before relocating to Cary in 2017.

Coach Riley had nothing but great things to say about the midfielder. “Huge year for Liz. She has suffered through two tough injury driven years. She won an NWSL Championship back in 2016 playing ton of minutes. She has great individual talent and can be a major impact for us this season. She is a versatile player who understands the game tactically. Liz will be massive for the squad during a World Cup year.”

Debinha will rejoin the Courage coming off of a season where she was named NWSL Second XI. The Brazilian has played 48 games for 3,377 minutes with the team. Debinha has recently been training with the Brazilian Women’s National Team in preparation for the season.

“Deb has evolved her game and adjusted her style of play to deal with the NWSL physicality,” Riley said. “She is worth the price of admission and we are very excited to have her back. Her growth over the last two years has been immeasurable and she is cunning, crafty, intelligent, skillful and has dramatically improved her work off the ball. She is a two-way player now and both ourselves and Brazil are reaping the benefits.”